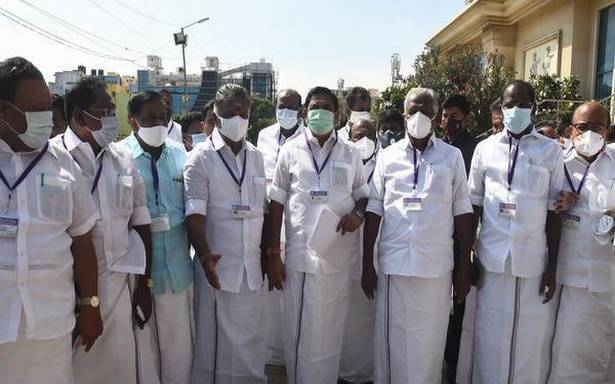 Leader of Opposition in the Assembly and AIADMK co-coordinator Edappadi K. Palaniswami on Friday criticised Chief Minister M.K. Stalin for not having closed down retail outlets of the Tamil Nadu State Marketing Corporation (Tasmac) on account of the COVID-19 pandemic.

Addressing journalists after leading a walkout of his party colleagues from the Assembly, Mr. Palaniswami recalled how Mr. Stalin, as Leader of Opposition, had staged a protest outside his residence, holding a black poster, demanding the closure of the retail outlets. But, now, with Health Minister Ma. Subramanian himself having gone on record about the spread of the pandemic, the retail outlets had not yet been closed down. “It is condemnable,” he said, and added that Mr. Stalin had spoken differently while in the Opposition.

The AIADMK leader, flanked by party coordinator O. Panneerselvam and other leaders, also came down on the distribution of Pongal gift hampers. He complained that not all the 21 items of grocery were being supplied. Even with respect of what was given, the quality of products was poor, he alleged.

He said despite the government stipulating that sugar cane be purchased at a rate of ₹33 for distribution, as part of the Pongal gift hampers, farmers were only being paid from ₹14 to ₹20.

Mr. Palaniswami slammed the Government for bringing in a bill to reduce the term of office of functionaries of cooperative societies by two years. He contended that the societies were all functioning well, and if there was any shortcoming in any society, a probe could be held to identify wrongdoers.

In a statement, Mr. Panneerselvam criticised the Government’s decision to extend the distribution of the gift hampers till January 31. He argued that as the Pongal festival would be celebrated on January 14, there was no purpose in distributing them till the end of the month. The Chief Minister should ensure that all the gift hampers were given to all family card holders, and the distribution was carried out without any shortcoming, he added.