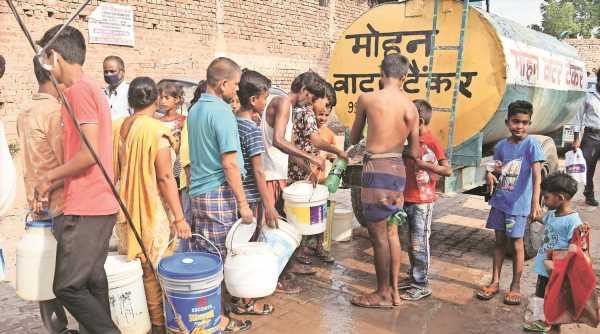 Underground spillage and mixing of sewer water in pipeline connections has been highlighted as the reason for the diarrhoea outbreak in Panchkula district, which was first reported on Wednesday. The outbreak has already claimed the life of a nine-year-old boy, while at least 300 persons from the village areas of Abheypur have been affected.

At least 56 patients are being treated at the public health camps set up in the affected areas, while others were admitted to Panchkula Civil Hospital. As many as 65 adults have been admitted to the hospital till now, along with 46 children in the pediatrics wing.

The stool samples collected on Wednesday have confirmed it to be cholera. The treatment is being given as per the disease and those affected are replying positively to it, said the doctors.

CMO Panchkula Dr Mukta Kumar, who visited the site Thursday as cases of diarrhea kept pouring in, said, “Upon my visit, I realised the sanitary conditions especially at Abheypur were extremely poor. The tank which provides water is right next to the sewer which is open and carries all house discharges. There was constant seepage of this dirty water underground, which may have led to this cholera outbreak.”

The hospital’s Covid pediatrics units, in absence of any cases, has now been designated to treat the children suffering from diarrhoea.

The death of the nine-year-old Arpit stirred up hue and cry by his his family members as they alleged negligence on part of the doctors. “He was admitted Tuesday night and was kept there till Wednesday morning after which they released him. He was only attended by a doctor once after which the nurses treated him. They discharged him in the morning and he died by noon,” said a member of the family.

Dr Kumar, addressing a press conference on the issue, said, “The on-call doctor kept him overnight and took a decision to discharge him. The child was even checked at the OPD and was fine as he stood by himself. But in cholera cases in children, the onset of diarrhea can sometimes be so excessive and so sudden that immediate steps are necessary. By the time they brought him to the hospital, there was nothing that could be done.”

The CMO, who herself checked the water dispensed at the homes of the victims, said, “The water was extremely dirty and unfit for any sort of consumption. This is a serious matter which must be taken up. I even called the executive engineer on the spot. Prevention is better than cure.”

The Public Health department of HSVP which began the inspection of the site Wednesday has however denied any responsibility in the matter.

Executive Engineer, Public Health department, Amit Rathee said, “Several teams that have been deputed have pin-pointed the location which may have led to the infection. There was a leak spotted at a connection pipeline which must was being used by a number of persons in the area. The government pipelines are generally used by persons through private connections which draw from our pipelines. This particular pipeline had rusted which was leaking water and in turn taking in sewer water which leaked on the side.”

Pointing out, that while this particular waterworks supplies water to the slums as well as several sectors, he said, “it is only the slums where such outbreaks take place and such problems persist mainly because of these haphazard connections taken at random and in clusters. Here, the individuals who took these connections are responsible for using cheap pipes which have been taken right next to sewer connections. This was not a departmental issue,” he added.

The department is now conducting surveys and checking if there may be anymore such leaks. “They are difficult to be identified as it is all underground spillage.”

The water through pipelines has been closed completely and water tankers have now been made available in the affected area. The results of the water samples sent for inspection are yet to come.