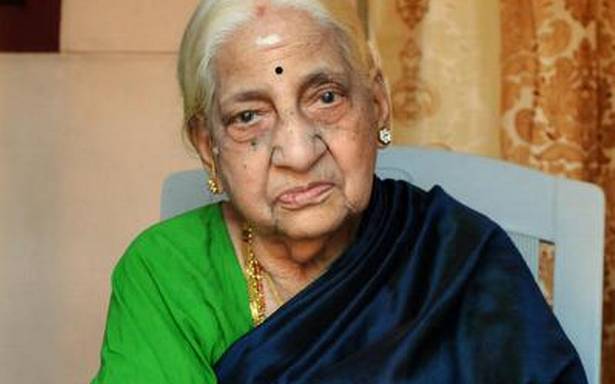 Doyenne of Carnatic music and Padma Shri award-winner Parassala B. Ponnammal died at her residence at Valiyasala here on Tuesday afternoon. She was 96.

Her death brings to an end a lifetime devoted to the pursuit of Carnatic music.

Born in Parassala in November 1924 to R. Mahadeva Iyer and A. Bhagavathy Ammal, she began learning Carnatic music while very young and has many firsts to her credit.

A first in many

She was the first female student of the first batch of the Sree Swathi Thirunal Music Academy, as the present Swathi Thirunal College of Music was known then, and completed the Ganabhooshnam course with first rank.

She became the first female faculty member of the college and then its Principal, and of RLV College of Music and Fine Arts, Tripunithura.

In 2006, she scripted history when she became the first woman to perform at the famed Navarathri Mandapam here, and went on to perform for 10 consecutive years.

She enthralled music lovers in the State and in Tamil Nadu even in her 80s, and was teaching students till last year.

Carnatic vocalist K. Omanakutty terms her a model teacher, fount of knowledge on music, and a practitioner of traditional Carnatic music. “I am fortunate to have had a teacher like her. She was very soft-spoken and never lost patience with her students. Her vast wealth of disciples are her biggest contribution to Carnatic music. Her death is an irreparable loss.”

Singer B. Arundhathi was not her student but had a very close bond with Ms. Ponnammal. She says be it raga alapana, niraval, or kalapana swaras, Ms. Ponnammal’s manodharmam embodied the purest aspect of music. Be it a major or minor raga, or a kriti, it captured the very essence of music. “She was fluent in Malayalam, Tamil, and Sanskrit, and rendered Swathi Thirunal’s Bhakthi Manjari on AIR.”

Ms. Ponammal did not chase recognition or awards, and dedicated her achievements to her gurus. She was very disciplined, punctual, and fully prepared for every concert. She was also humility personified and encouraged her students. Even in old age, her voice did not change, and retained its sweetness, recalls Ms. Arundhathi.

Ms. Ponnammal started giving public performances at the age of 16 by winning a gold medal in a competition held in connection with the birthday celebrations of Sree Chithra Tirunal. She started her career as a music teacher at Cotton Hill school in 1942 and was a top grade artiste of both AIR and Doordarshan.

She was a recipient of the State government’s Swathi award and the Sangeet Natak Akademi award in 2009 and the Kerala Sangeetha Nataka Akademi award, among other honours.

She is survived by sons D. Mahadevan and D. Subramaniam. Her husband R. Devanayakam Iyer pre-deceased her.