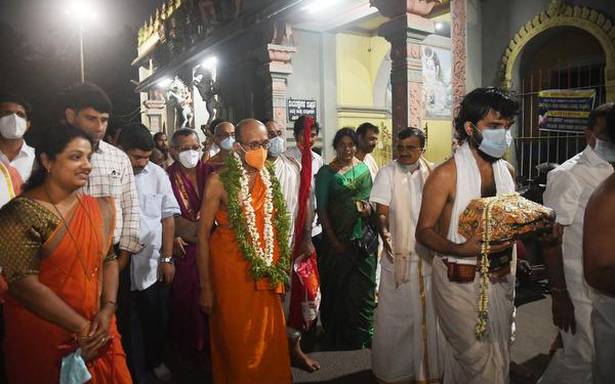 The Paryaya Mahotsava of Udupi Sri Krishna Temple/Mutt will be conducted in a simple manner this time, according to Udupi MLA and working president of Paryaya Mahotsava Committee K. Raghupati Bhat.He told presspersons in Udupi on Sunday that the Pura Pravesha of the next Paryaya seer, Vidyasagara Tirtha of Krishnapura Mutt, to be held at Jodu Katte at 3 p.m. on Monday will also be a low-key celebration.

A meeting the committee members had with Deputy Commissioner M. Kurma Rao and Superintendent of Police N. Vishnuvardhan on Paryaya celebrations has decided not to celebrate the Pura Pravesha and other events in a grand manner. Not many cultural troupes will be participating in the celebrations on Monday.

A civic felicitation on Monday will be held, but it will not prolong and end by 6 p.m. to adhere to night curfew rules. Even though Hore Kanike processions will be taken out starting Tuesday, they will not be held on the weekend, the MLA said.On January 17 night, the cultural events of the Paryaya Committee will end by 10 p.m., he added.

Mr. Bhat said that special permission from Chief Minister Basavaraj Bommai has been sought to organise Paryaya procession in the early hours on January 18, the Paryaya day. As it is expected that night curfew will continue to be in place, the customary Paryaya procession early on January 18 can be taken out through a special permission. Even if permission is given for the procession, it will be taken out in a simple manner. The go-ahead is expected from the State Government within two or three days, he said.

Meanwhile, the Krishnapura Mutt seer was given a public felicitation in a simple manner on the premises of Sharavu Mahaganapathi Temple in Mangaluru on Sunday.