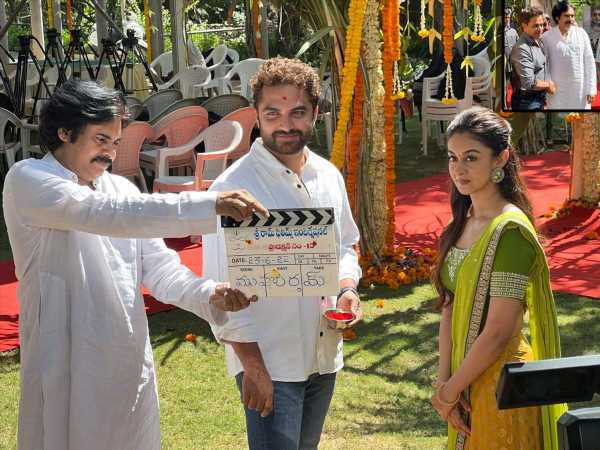 Kollywood star Arjun Sarja is going to take on the role of director after a four-year hiatus. He is directing a straight Telugu film for the first time in his life, which has young actor Vishwak Sen, who has earned a decent following through his movies in recent times, had appeared in a titular role in his recent outing ‘Ashoka Vanamulo Arjuna Kalyanam’. Now,   Hit and Falaknuma Das  fame actor is to be directed by Arjun Sarja. This upcoming movie marks Vishwak Sens’s 11th movie. The movie marks the Tollywood debut of Aishwarya Arjun, the daughter of Arjun Sarja. Jagapathi Babu will be seen in a crucial role in this movie. Now according to the latest report, today morning Power Star Pawan Kalyan launched Vishwak Sen, Aishwarya Arjun and Arjun Sarja film at Ramanaidu Studios in Hyderabad.

Vishwak Sen, Arjun  Sarja and others attended the pooja ceremony.  The upcoming film is bankrolled by Sree Raam Films International and has the music by Ravi Basrur. Sai Madhav Burra is penning the dialogues and Neeraja Kona is the costume designer.

On the otherside, Pawan Kalyan was last seen playing one of  the lead role in Bheemla Nayak and currently he is working with Krish for his next Hari Hara Veera Mallu.