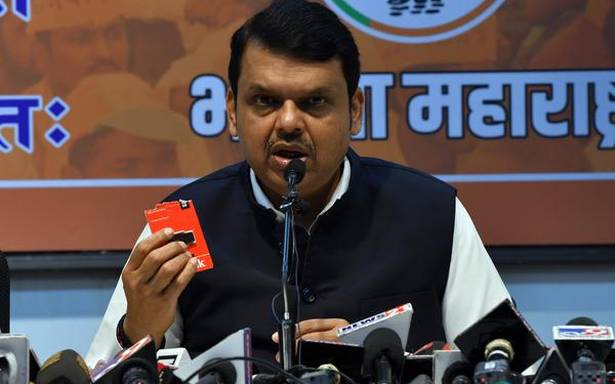 BJP leader denies allegations on use of spyware by earlier regime

Facing allegations that the Maharashtra government too may have used the spyware Pegasus to snoop on political opponents, former Chief Minister and BJP leader Devendra Fadnavis on Tuesday said the government did not avail of the services of the Israeli firm NSO till he was in the office.

“Maharashtra government did not avail services of the NSO till I was the Chief Minister,” he said, addressing a press conference. Mr. Fadnavis, however, acknowledged that a team from the DGIPR (the State government’s publicity department) went to Israel after the 2019 elections before the new government was formed. “But the trip was for agriculture development purposes,” he claimed.

During the previous regime, the opposition Congress had alleged that several opposition leaders were under surveillance. Questions have also been raised as to whether evidence was digitally planted against the human rights activists arrested in the Koregaon-Bhima case.

“Was any IPS officer sitting in Mantralaya working on this? With whose permission did the DGIPR officers go to Israel? What training did they receive? Did they come back and report? Is it related to Pegasus? It is surprising and suspicious that such tours have taken place during the election period,” Mr. Sawant had tweeted.

Countering the criticism, Mr Fadnavis said, “We noticed that one or two media (outlets) got Chinese funding and carried out propaganda. The Pegasus issue is part of a design to derail the ongoing Parliament session.”

“At a time when Prime Minister Narendra Modi is taking the country on the path of progress, there are some international forces that are trying to malign the image of the country,” he alleged, adding that the Central government has denied having snooped on any person with the help of NSO and one should trust it.