‘No one in Sri Lanka could afford to stay at home, everyone came onto the street.’

“I would call it a struggle and not a revolution because it has a particular purpose. The purpose is to get rid of a system of political governance, which includes the current, the former president and prime minister, but also the executive presidency,” says Swasthika Arulingam, a lawyer-activist who participated in the people’s protests at Galle Face in Colombo that ousted the powerful Rajapaksas of Sri Lanka.

“People from all walks of life came together because they literally have nothing to lose,” Arulingam tells Rediff.com‘s Archana Masih in a telephone conversation from Colombo.

What is the mood among the protestors after Gotabaya Rajapaksa finally resigned after an unprecedent people’s protest by the people of Sri Lanka?

It’s a mixed feeling because the people have been asking for the resignation of both the president as well as the prime minister.

More than joy or happiness, it was a huge relief when the speaker officially announced the president’s resignation on Friday [July 15].

He has finally resigned, but the current president (Ranil Wickremesinghe), who was the former prime minister, also has a problematic human rights history. He is also responsible for bringing in the office of executive presidency.

The protests have achieved what it had started out for. What next?

The struggle started off by saying ‘Gota Go Home’ and asking for the president’s resignation.

Prime Minister Mahinda Rajapaksa also resigned because of the protests.

Ranil Wickremesinghe, who replaced him, was largely seen as one who was brought in to protect and shield the Rajapaksas. He lost a lot of credibility and the struggle started expanding and calling for the resignation of both the president as well as the prime ministe.

We have only achieved the first part of the struggle. A few weeks back, we also put forward an eight-point plan for whoever comes into power.

The government needs to abolish the executive presidency because that is the root cause of all evil.

The struggle is not over and is continuing. This protest did not have any specific leaders, but as an activist, what role did you play? How did the protests metamorphose into a revolution?

I would call it a struggle and not a revolution because it has a particular purpose.

The purpose is to get rid of a system of political governance, which includes the current, the former president and prime minister, but also the executive presidency.

The strength of the movement was that it did not have a leadership and was not affiliated to any particular political party.

People who would otherwise shy away from struggles and protests came to Colombo whenever there was a call. They gathered in large numbers because they were suffering an acute economic crisis. The crisis acted as a catalyst.

Lawyers got involved in the struggle and as a lawyer myself, I am just part of the struggle. We all contribute in different ways.

There were periods when the struggle did not pick up and still there were people camping at Galle Face and holding the fort.

Different people have come together and given their expertise into the struggle.

It has strengthened the movement.

How did the protestors react to Gotabaya Rajapaksa’s resignation, coming in as it did after so many ifs and buts?

When the announcement was made, there were fireworks, singing and dancing. It was a joyous mood. The following morning, people served the traditional sweet dish of milk and rice.

The protest was peaceful over the past three months, but there have been reports of some clashes. Does it risk turning violent now? What are the challenges before organisers to ensure that it remains a peaceful struggle?

There are people trying to create discord and disharmony amongst the protestors.

Secondly, the people who cause violence want to see the struggle defeated because its strength comes from the fact that it is peaceful.

Those who have continued the struggle have always called for a peaceful protest.

The armed forces fired live ammunition, but people have not provoked them.

I believe, the only people who benefit from portraying the protestors as violent and creating disharmony are the former president and the current acting president.

We as people on the ground are conscious of these tactics. But we will always strive to ensure that it remains peaceful. The Rajapaksas — Mahinda, Basil, Chamal — are very much around in Sri Lanka. Do you think they will be compelled to stay on and face the courts if they want a future for themselves in Sri Lankan politics in years to come?

Until this protest, the Rajapaksas were invincible. They were an extremely powerful family. We could never imagine a year back that they could be ousted by a people’s movement.

In response to the struggle, they could have acted responsibly and withdrawn from power. This could have ensured the possibility of their return to power later on.

But the way they responded has discredited them. I don’t think they will be back, at least for the next several years.

They brought this upon themselves. They were so arrogant and emboldened by their own power and their grip on Sri Lankan politics that they failed to realise that this moment is very different to what was before. It’s different because of the economic crises; it is different because people literally have nothing to lose.

They are without food, fuel and electricity and have nothing to lose in this struggle.

Do you believe the next government will engage with the protesters about the future of Sri Lanka?

I know for a fact that the government and the current people in power, at least now, are fearful of the protestors.

The people in power right now are conscious by what the protestors can achieve.

I would hope that this will remain so and continue to listen, even if they don’t want to directly engage with the protestors.

The former president and the current acting president have ignored people’s demands and been indifferent.

But right now, because of the situation on the ground, they are very responsive.

Since Gotabaya’s resignation, is there any indication that the people in power are reaching out to alleviate people’s suffering in terms of better availability of food or fuel or gas?

As of now, the people in power have absolutely no plan. They are caught up in a political drama. As of now, the government does not have plans for distribution of fuel and dealing with the food crisis.

Experts are saying September is going to be really bad. 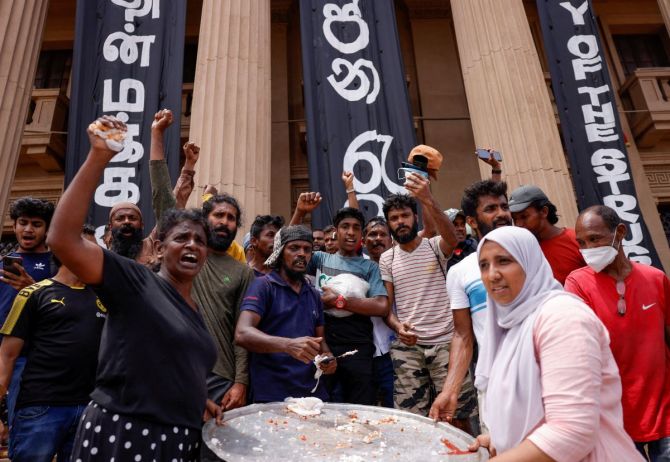 What is the goal and objective of the protestors?

The government should come up with a package to immediately alleviate the sufferings of the people.

The eight-point plan also includes forgiving the debt of microfinance victims which was a huge issue, even before the crisis broke out.

Their demand was precisely because they were unable to pay back the loan.

It also deals with long term issues like justice for victims of enforced disappearances and extrajudicial killings; constitutional reforms which includes the aspirations of the ordinary people.

It includes both a short term to alleviate the suffering of the people and also long term plans.

Who were the people who came to the protest and made this into such an unprecedented people’s movement?

The deep economic crisis has affected everyone. Until maybe last year, it was farmers, women affected by microfinance loans, and so on. But this year onwards, people from all walks were coming.

No one in Sri Lanka could afford to stay behind at home, everyone came onto the street.

The crisis has hit everyone.

How was food and water, etc being organised for the protestors?

There has been an outpouring of donation of food and water by well wishers. People were sleeping on the road.

There was a lot of tear gas being used to disperse protestors. Random families were coming onto the streets with hose pipes and buckets of water to wash off the effects of the tear gas.

There were acts of solidarity coming from ordinary people who live along the streets of Colombo. When do you think Sri Lanka will see better days?

The world economy is in recession. If we, as a country, have to face this, we need to at least have a stable political system and governance.

It also needs a lot of support and solidarity from the international community.

What do the last three months, particularly, tell you about the Sri Lankan people?

The Sri Lankan people are very responsive to suffering when they see it with their own eyes.

I’m a Tamil person living in Colombo and know what happened in the north during the war and the way the majority Sinhala acted or responded.

When you see this struggle, you also see that politicians, political actors, the media and several people with vested interests have kept the suffering of the war to a large extent away from people in the south.

I think the trajectory of Sri Lanka would have been very different if we would have had a more open information flow about what happened in the last stages of the war.

If that could have happened, then people would have seen much faster what the Rajapaksas could do to a country like Sri Lanka and what they finally did in the end.

I think the Sri Lankan people are very responsive to suffering when they see it. But we are also trapped in our own biases, particularly race biases, which I believe is one of the root causes of why we have come to this crisis today.