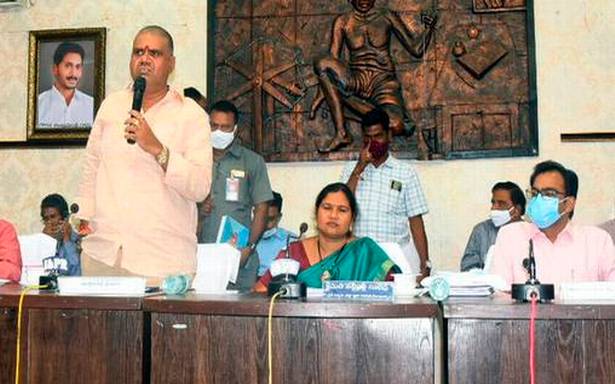 Muttamsetti directs DMHO to take action on the issue

The general body of Zilla Parishad, at its first meeting, discussed the issues pertaining to employment assurance, medical and health and drinking water.

The meeting was held, under the chairmanship of ZP Chairperson J. Subhadra, at the meeting hall of Zilla Parishad, here, on Sunday.

Anakapalle MLA Gudivada Amarnath sought filling up of the vacant posts of ASHA workers. The Minister suggested that a separate review should be held on health by the officials with regard to hospitals, doctors and health problems.

DWMA Project Director Sandeep said that measures would be taken for construction of 51 panchayat buildings under the Employment Assurance Scheme. He proposed the material component under EAS for the approval of the general body. Several members brought to the notice of the chair that EAS should be extended to agriculture.

The Minister called for coordination among ZPTC members and officials for the alleviation of the problems of people. He suggested that local issues could be brought to the notice of the Collector. He directed the in-charge Collector to ensure that the problems pertaining to drinking water, roads, sanitation and electricity were overcome. He said that development of rural areas was being done as never before under the leadership of Chief Minister of Y.S. Jagan Mohan Reddy.

Surgeries were being done at the government hospital in the Agency areas of Paderu and measures were initiated for establishment of medical colleges at Paderu and Anakapalle, he said.

Mr. Mutyala Naidu asked the officials to come with complete details of the various works and their status, when they come for the next meeting.

Ms. Subhadra read out the names of the chairpersons and members of the seven Standing Committees, appointed to discuss various subjects, and they were approved by the general body.