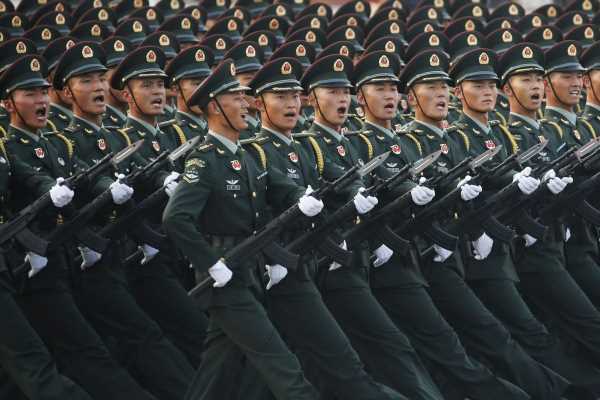 Protests at this time when efforts are underway to strengthen the PLA and keep morale high would be worrying for the military leadership, observes Jayadeva Ranade, the retired senior RA&W officer and distinguished China expert.

The Chinese Communist Party (CCP) and, for that matter particularly after the Cultural Revolution, the Chinese people are very apprehensive of chaos (dongluan) or social upheaval.

The CCP is especially concerned at the possibility of students, workers and retired soldiers coming together against the regime.

Restructuringof the military and reforms implemented by Xi Jinping has demobilised 300,000 soldiers who have swelled the ranks of the millions already unemployed.

The economic downturn, further accentuated by the Covid pandemic has raised the levels of inequality in Communist China to among the highest in the world.

The possibility of dissatisfaction among ex-servicemen spreading to serving People’s Liberation Army personnel, who retire in the thousands each year, has added to the leadership’s concerns.

Obviously aware of complaints regarding low pensions and inadequate financial support, the CCP leadership has over the years taken a number of steps to address their difficulties.

On July 29, he unveiled that according to a notification issued by the Central Military Commission on July 7, 2021, starting August this year eligible military personnel will begin receiving parental support benefits of RMB 600 per month. This is for individuals who have one parent over the age of 60.

The other subsidy of RMB 500 per month is to support the spouses of active military personnel.

Simultaneously, stringent public security measures and enhanced restrictions on the Chinese media have contributed to fewer reports of protests by China’s 57 million veterans and ex-servicemen.

Public security authorities are also very alert to any signs of protests being organised and crackdown promptly.

Public security authorities in any case prevent petitioners, or people with grievances, from traveling to Beijing during sensitive or periods.

Despite such steps, Beijing witnessed a rare, major, protest demonstration by demobilised and veteran soldiers this month.

On September 13, more than 200 veterans from across China managed to avoid barriers and detection by public security authorities and arrived in Beijing.

They assembled outside the headquarters of the Central Military Commission, which is chaired by Xi Jinping, and shouted slogans demanding military veteran’s rights and complained about inadequate retirement benefits.

The Epoch Times reported that a large police force was mobilised and 137 of the 200 demonstrators were arrested. The rest of the veterans fled from the scene.

The arrested veterans were sent to Beijing’s ‘jiujiangzhuang‘ unofficial detention center and have not yet been released.

It is very likely that those arrested will be awarded stiff sentences as a deterrent to others.

In a similar protest by veterans in Zhejiang province in 2019, nine persons were arrested and sentenced to 2 years of prison for the crime of gathering people to disrupt social order.

China’s leadership has taken a number of steps over the past few years to ameliorate the living standards of retired and veteran soldiers.

A Ministry for Veterans Affairs was established under the State Council in 2018 and various schemes introduced for the re-employment and rehabilitation of ex-servicemen in coordination with provincial and local governments and state-owned enterprises.

The persistent issue of lack of respect for them in Chinese society, perhaps because the bulk of them come from rural areas, has also been sought to be addressed.

Local governments have been instructed to affix ‘honour boards’ outside their residences.

However, despite these measures and consecutive year-long ideological and political campaigns throughout the PLA emphasising ‘absolute obedience’ to the CCP, complaints about inadequate benefits, low morale and indiscipline persist.

Liu pointed out that since the 18th Party Congress ‘a series of laws and policies concerning the status and rights of soldiers have been intensively promulgated, and the supporting facilities have been improved, making soldiers a profession respected by the whole society’.

He called for publicising and implementing ‘these favorable policies and regulations well’ for recruiting high-quality soldiers.

The appearance of these articles suggests a high incidence of such instances in PLA units.

On May 20, 2021, two PLA officers from the Political College of National Defense University and the Joint Logistics Support Force Longyan Comprehensive Warehouse Support Team, jointly authored an article published by the Chinese government’s largest think-tank, the Chinese Academy of Social Sciences, expressing serious concerns about the PLA rank and file’s adherence to the party’s absolute leadership over the army.

They asserted that ‘the party’s absolute leadership over the army is the fundamental principle of our party’s army building and ruling the army’, but this is facing new challenges today.

Among the contributory factors, they listed the pace of military modernisation and rejuvenating the army; new methods of building the army at the grassroots level; the “profound new changes” in mission requirements, including the composition of officers and soldiers and troop organisation; and the external social environment.

The article stressed the importance of clearing out ‘the fog of thought’.

The sentiments were indirectly echoed the same week in a Liberation Army Daily article by a member of PLA Unit 31006.

He asserted that ‘Party members must enhance their sense of honour’ and bolster the ‘sense of pride as a member of the party organisation’.

He urged soldiers to emulate the ‘infinite loyalty to the party’ of veteran revolutionaries and the manner they cherished the ‘honourable title of “Communist”‘!

The protest at this time when efforts are underway to strengthen the PLA and keep morale high would be worrying for the military leadership.

Their major worry will be that this dissatisfaction could spread to serving PLA personnel since the tenure of service of Chinese conscripts is short and thousands are demobilised each year.