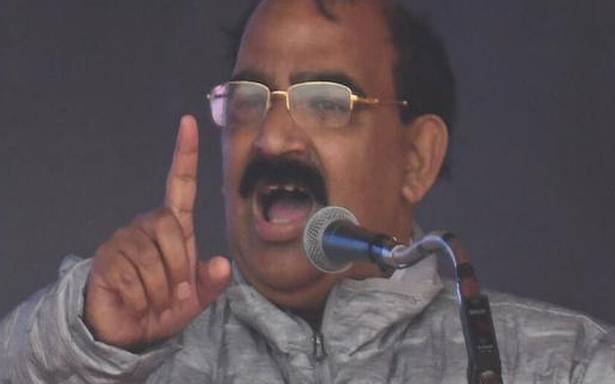 A large number of buses and other vehicles carrying BJP workers were prevented from reaching the rally site, the party alleged.

Punjab BJP leaders on Wednesday, January 5, 2022, alleged that the State police was instructed not to allow party workers from reaching the rally site at Ferozepur where Prime Minister Narendra Modi was to lay foundation stones of development projects.

Mr. Modi, who landed in Punjab’s Bathinda and had to take the road route to Hussainiwala in Ferozepur because of inclement weather, was stuck on a flyover for 15-20 minutes due to a blockade by some farmers, an incident the Union Home Ministry described as a "major lapse" in his security.

The PM was scheduled to address a rally in Ferozepur, which was cancelled after the incident.

A delegation of the BJP will meet the Punjab Governor regarding the incident on Thursday, January 6.

Punjab BJP chief Ashwani Sharma said a large number of buses and other vehicles carrying BJP workers and other people were prevented from reaching the rally site.

Mr. Sharma said 25-30 people were "made to sit and protest at 21 places and they had the government’s backing".

"There is no democracy left in Punjab", he said.

Buses and other vehicles carrying BJP workers were stopped at Ferozepur, Kathunangal, Harike, Kotkapura and Talwandi.

He said 3,485 buses and 5,000 other vehicles from different parts carrying workers were reaching for the event.

Sharma alleged that police connived with protesters to block the movement of BJP workers for the rally.

Another BJP leader Subhash Sharma said police had put up barricades under the garb of some 20-25 farmers showing them that they were holding protests. Punjab BJP leader Harjit Singh Grewal claimed that windows of some buses were also smashed and some workers were beaten up.

A few BJP supporters sustained injuries with Union Minister Gajendra Singh Shekhawat inquiring about their wellbeing in a hospital in Moga, said a BJP leader. Senior BJP leader and Union minister Meenakshi Lekhi told reporters in Ferozepur that at various points, the BJP workers coming from all over the State and their vehicles were stopped.

"Many of our workers were beaten up, lunch boxes were snatched from buses," she alleged.

In a late evening statement, the Punjab BJP chief said there was complete collapse of law and order in Punjab, and said his party has demanded that responsibility for the grave lapse must be fixed and those found guilty must be held accountable.

"It is unprecedented in the history of the state and probably in the history of the country that the Prime Minister was stuck on the road for about 15 to 20 minutes as the anti-social elements duly supported and encouraged by the Punjab government led by Charanjit Singh Channi were allowed a free run on the roads and the Prime Minister had to turn back towards the Bathinda airport," said Mr. Sharma.

He alleged for petty partisan benefits, the state government compromised the security of the Prime Minister of the country, putting his life to grave risk.

“We can’t rule out some deep-rooted conspiracy and it needs to be probed to the minutest detail," he said asserting that it was a “willful and criminal negligence of the state government with ulterior motives”.

Sharma said, the state government cannot hide behind the excuse that the Prime Minister changed his travel plan at the last minute by opting to take road route from Bathinda to Ferozepur, instead of flying to the Martyrs’ Memorial at Hussainiwala.

He said it was because of the heavy rain and poor visibility that the plan was changed.

"Should not the state government have taken all security precautions by securing the possible routes for the Prime Minister to reach the venue as it was its responsibility," Sharma asked.

He alleged the state government was deliberately intent to play the spoilsport as it did not want the Prime Minister to start developmental projects worth thousands of crores as it feared the BJP will gain public support.

He said he had received reports from across the state where "hooligans supported by the Punjab Police" were preventing BJP workers and supporters from reaching towards the venue.

"Please do not test our patience as we have been patient for a long time, but not anymore," he warned, adding "for one year (during farmers’ stir) we were brutally attacked and almost killed, our workers were subjected to humiliation and persecution and we exercised utmost restraint, but enough is enough as this time we are running out of our patience".

“Writing is on the wall, Mr Chief Minister, and your countdown has begun”, he told the CM.

The State BJP president appealed to all the Punjabis to judge for themselves as to who was trying to sabotage the peaceful atmosphere in the State.

“I am sure, our Punjabi brethren must have understood by now the divisive designs of the Congress government in the state as it can go to any extent to divide people for petty partisan interests,"he said.