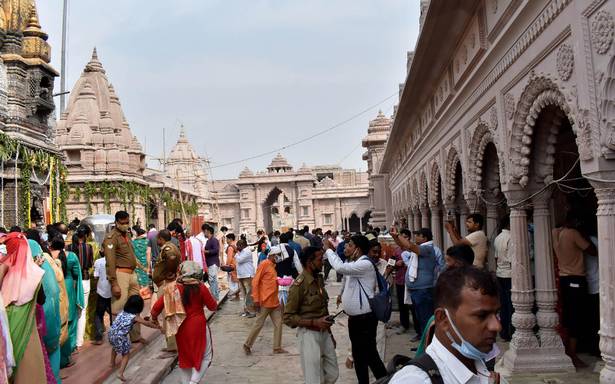 The project connects the temple with the ghats of the Ganga, with a paved walkway around 320 metres long and 20 metres wide.

Prime Minister Narendra Modi will inaugurate the Kashi Vishwanath Temple Corridor project on December 13 in Varanasi, his parliamentary constituency, alongside families of those who had been displaced due to the project.

The project inauguration comes with just a few months to spare for Uttar Pradesh Assembly polls and has significance in terms of cultural politics for the State.

According to senior sources in the BJP, at least 400 families were asked to vacate the area, many of the encroachments around the historic temple cleared to make way for the project that encapsulates the vision of the Holkar queen of Indore, Ahalya Bai Holkar who created a series of temples and vistas leading up to the Ganga ghat.

“Over the years, there were buildings, housing and other construction that came up around the temple and that entire vista was obscured. The project has restored it. Those displaced have been given compensation, and will be joining the inaugural ceremony,” said a source.

The project connects the temple with the ghats of the Ganga, with a paved walkway around 320 metres long and 20 metres wide. It will also have facilities for a museum, library, a facilitation centre for pilgrims and a Mumuksha Bhawan (salvation house).

According to Shashi Kumar, head of U.P. BJP’s social media cell, the function would see the presence of the main ‘archakas’ of the 12 ‘Jyotirlingas’ (of which Kashi is one), with water from all major rivers of the country being brought in for the ‘abhishek’ of main deity Baba Vishwanath (Lord Shiva).

“A sound and laser show on the history of the temple, and its repeated reconstruction from destruction will be part of the event, and the Ganga ghats will be lit up as in the manner of ‘Dev Dipawali’,” he told The Hindu.

The project is an important one for Mr. Modi and is pegged at ₹ 600 crore (approximately) after it was launched in March 2018. An estimated ₹ 300 crore was spent on purchasing land and buildings around the temple complex, and for resettlement compensation alone.