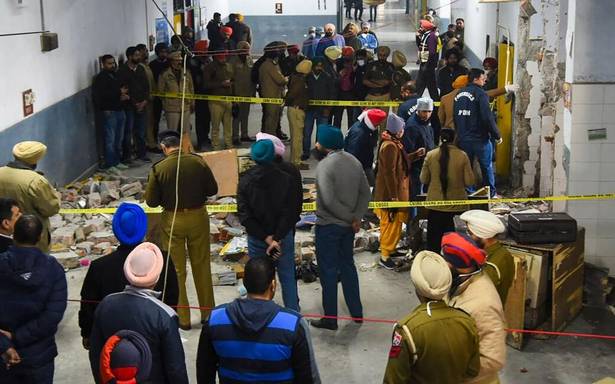 He was a dismissed police official

The investigation revealed that deceased was carrying the explosive, Punjab Director General of Police Siddharth Chattopadhyaya said in a press conference on Saturday.

Singh was a resident of Khanna in Ludhiana and was dismissed from police service in 2019 after he was found to be involved in an illicit drugs trafficking case.

“Within 24 hours we could trace the main accused. He turned out to be a dismissed head constable of Punjab police. He was arrested by Special Task Force for carrying narcotic drugs. The case which has been registered against him in 2019,” Mr. Chattopadhyaya elaborated.

After staying in jail for two years, Singh was recently out on bail and his trial was underway.

“Most probably in the jail he came in touch with others [criminals] and his transition from narcotics to mafia to drugs is a very dangerous combination, which has come to the fore. It’s going to be a major challenge for us. We have traced people associated with him. The investigation revealed that there are links within the jail, across Punjab and from abroad with Khalistani elements, terror outfits, mafias and narcotic smugglers,” said the DGP.

On Thursday, an explosion at the district court complex in Ludhiana killed Gangandeep Singh and injured six others.

Political parties asserted that the incident was an attempt to create disturbances in Punjab ahead of Assembly elections in early 2022. The Ministry of Home Affairs (MHA) too sought a report from the Punjab government on the blast.