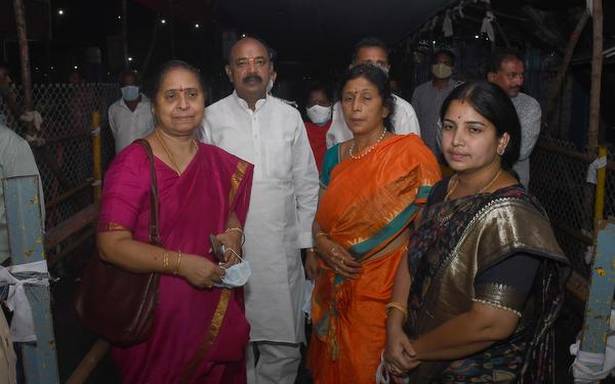 Officials of Endowments, Revenue, Police, Vijayawada Municipal Corporation (VMC), Andhra Pradesh Transco and other Departments reviewed the arrangements for Dasara Utsavams, scheduled to begin from October 7 atop Indrakeeladri, on Tuesday.

The officers visited the ghat road, kalyana katta, construction of retaining wall at prasadam board, free annadanam and the prasadad counters at the temple.

Mr. Nivas directed the temple EO and the VMC Commissioner to speed up the works at the queue line, setting up of prasadam counters, drinking water and other facilities for the utsavams.

“Besides, police pickets would be set up at bus and railway stations and at all major junctions. Special teams would monitor the situation round-the-clock,” Mr. Srinivasulu said.