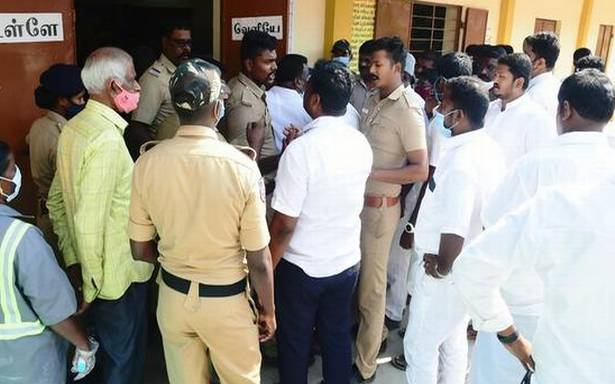 Polling was largely peaceful in Tiruvallur district, which comprises 10 Assembly constituencies, but for sporadic incidents and protests in a few places. The district registered 69.3% turnout.

Of them, Tiruttani recorded the highest turnout of 79%. In Maduravoyal, the turnout was the lowest with 59.2%.

Many polling booths were crowded as early as 7 a.m. as people, particularly senior citizens, came in large numbers to vote. However, they had to wait in some booths as the polling process was either slow or delayed by about half-an-hour due to initial hiccups.

In seven places, including Thiruvalangadu and Pappanchatram, Poonamallee, polling was delayed by nearly 20-30 minutes due to issues in EVMs. Tension prevailed at a booth in Uthukottai for over half-an-hour due to an argument between agents of various political parties.

According to the police, though only one booth agent was allowed from each party, some parties had more than two agents inside, which caused the friction.

In another incident, DMK cadre staged a roadblock that lasted 30 minutes at Sathirai village, alleging cash distribution by AIADMK men.

For nearly 460 voters in Thangalperunpulam and Idayankulam villages near Pazhaverkadu, the voting process was an ordeal. They had to travel across the Pazhaverkadu lake by boat to reach the booth at Koraikuppam. Even after three decades, the situation has not changed.

Das, a resident of Idayankulam, said: “We have to travel a minimum of 3-4 km to reach the lake and again 1 km to cross the lake. Travel by road would take 20 km to reach the booth.”

Residents wanted their long-pending demand for booths in Thangalperunpulam be fulfilled.

Durai Mahendran, a resident, noted that women and senior citizens found it difficult to travel by boat and often refrained from voting. Several representations had been made on the issue.

In Athipet, which falls under the Ambattur constituency, residents staged a protest.

They were moved from the Villivakkam constituency to the Tamil Nadu Slum Clearance Board tenements.

The names of nearly 2,000 residents did not figure in the list at Athipet, despite having new addresses in the voter ID cards.

Among the 4,902 booths, 15 were identified as critical and 627 as vulnerable. In one of the critical booths at Thambureddypalayam, Gummidipoondi, 60% of the votes were polled by 1 p.m. without hassle. According to Tiruvallur District Election Officer and Collector P. Ponniah, such booths were monitored continuously. Nearly 17% of the voters were first-timers.

Of the 70 COVID-19 patients, 58 cast their votes in full PPE kits in five booths across the district.