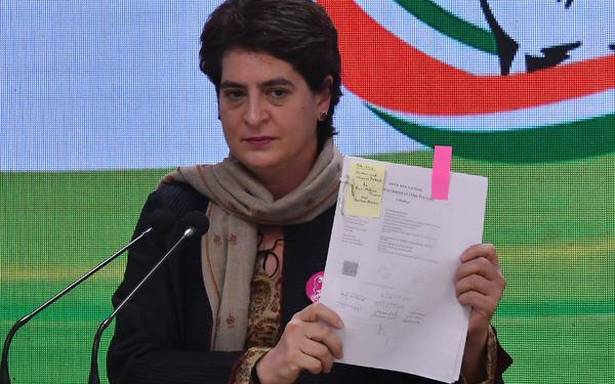 She urges SC to intervene in Ayodhya land deals

Congress general secretary Priyanka Gandhi on Thursday accused the BJP-Rashrtiya Swayamsevak Sangh (RSS) functionaries of “indulging in corruption” in the name of Lord Ram and hurting the faith of millions of devotees by ‘misusing’ the funds of the Ram Temple Trust in questionable land transactions.

Ms. Vadra, who is in charge of party in Uttar Pradesh, dismissed the probe ordered by the State government to inquire into the news reports that government officials and BJP leaders ‘rushed in’ to buy land at Ayodhya after the Supreme Court in November 2019 cleared the construction of Ram temple.

‘It is an eyewash’

Terming the probe an “eyewash,” Ms. Vadra said at a press conference that the apex court should intervene.

Land belonging to Dalits that was not allowed to be sold was also being “usurped and illegally bought” by officials and their relatives, she alleged and questioned the “silence” of Prime Minister Narendra Modi.

BJP leaders have “sold the sentiments, faith and religion by indulging in loot and misuse of donations” received for the Ram temple, she stated.

“The money from the Ram Mandir Trust is being basically misused to benefit government officials and members of the BJP and the RSS,” she remarked.

“A piece of land which was sold in 2017 to a certain person was then sold by that person in two parts. The first part, it was 10,000 square metres, was sold directly to the Ram Mandir Trust for Rs. 8 crore. The second part, which was 12000 square metres, was sold 19 minutes later to a certain Ravi Mohan Tiwari for Rs. 2 crore. Five minutes later, this Mr. Ravi Mohan Tiwari, is selling that Rs. 2 crore land for Rs. 18.5 core to the Ram Mandir Trust,” she said.

“The Prime Minister and the Chief Minister are trying to save those who have indulged in theft of donations for the Ram temple. As per the registered land deeds, there is a 1300 per cent rise in land price within five minutes. The massive corruption in Trust money is very clear,” she alleged.

Congress chief spokesperson Randeep Surjewala, who also explained details of various transactions, claimed that this was one of the fastest appreciation of land value anywhere in the world that rose by over Rs. 5.5 lakh every second.

Ms. Vadra said, “The Trust was formed on an order of the Supreme Court, the enquiry should be done at that level… It is my view that the court, perhaps even suo motu, should intervene because here we are talking about the faith of millions. The fact that millions of people, not necessarily well off people, poor people also have given their savings to this trust, there is some moral responsibility owed to them.”

She named Ayodhya Mayor Rishikesh Upadhyay and his nephew, besides trustee Anil Mishra and Champat Rai, secretary of the Ram temple Trust, as being involved in the land deals.

“You cannot order an inquiry at the level of a district magistrate when the person, who has signed the paper, is the Mayor. It is absolutely ridiculous, so who are you trying to fool,” she asked.