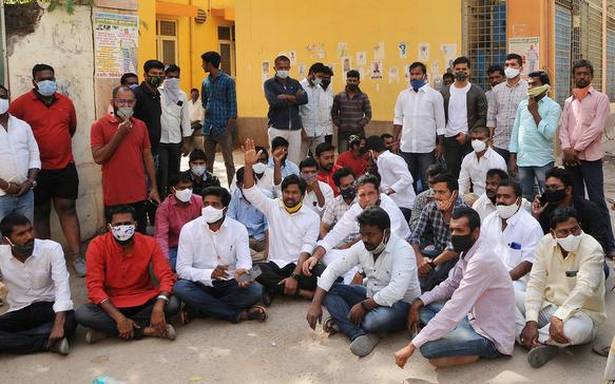 Protests continued on Friday at Tejavath Singh thanda in Gudur mandal of Mahabubabad district, the native village of Sunil Naik, when his body was shifted there after the post-mortem at Gandhi Hospital here.

The villagers prevented police from shifting the body from the ambulance until an ex gratia of ₹1 crore was announced for the victim’s family. Congress MLA of Mulugu Seetakka joined the protesters in booking a case against Chief Minister K. Chandrasekhar Rao as Sunil had taken his name in the selfie video while pouring out his anguish over not getting a job.

Another group of protesters laid siege to the house of Panchayat Raj Minister E. Dayakar Rao in Warangal town.

State CPI secretary Chada Venkat Reddy asked the State government to own moral responsibility for the death. He warned of social tensions and suicide by youths just as they took place during the separate Telangana movement if recruitment for government jobs was not taken up immediately.