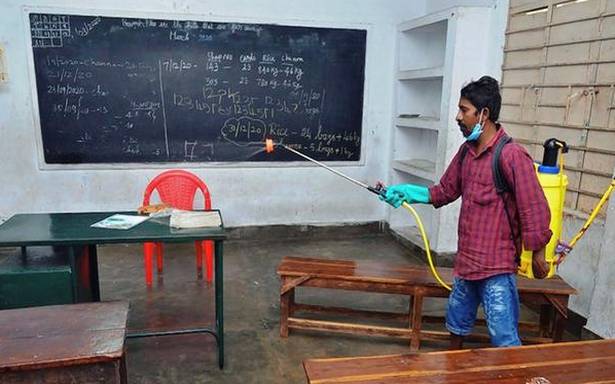 Over a hundred staff members and students were administered swab tests

A government middle school in Pakkamudayanpet here was shut down on Monday after a teacher tested positive for COVID-19. Over a hundred staff members and students were administered swab tests.

The premises of the Dr. B.R. Ambedkar Government Middle School was disinfected. So far, no one else has tested positive for the virus.

P.T. Rudra Goud, Director of School Education, said a holiday had been declared for the school on Tuesday as a precautionary measure to allow for an extended observation period.

The Pongal holidays were scheduled to start from January 13 to 17.

“Though it has been proposed to commence full-fledged classes from January 18, a final call on this is yet to be made,” he said. Since January 4, schools have resumed classes from 10 a.m. to 1 p.m.

Meanwhile, Puducherry reported 22 new cases from 2,063 tests on Monday. No deaths were recorded in the last 24 hours.

Puducherry accounted for 18 new cases and Mahe four. Karaikal and Yanam did not report any new case.

With 34 recovered patients, the active cases stood at 305. Of this, 152 patients were in hospital and 153 in home isolation.

Till date, the Health Department has tested an estimated 5.19 lakh samples, of which 4.76 lakh returned negative.