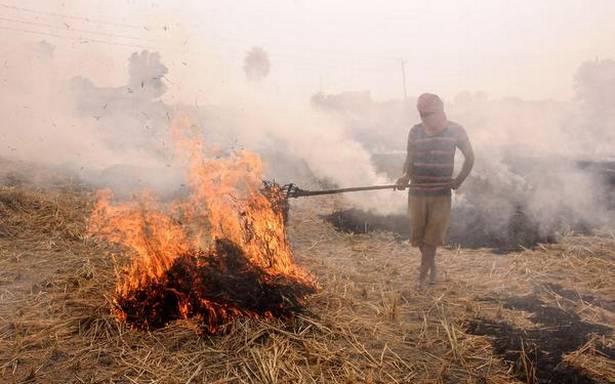 Close to the autumn every year, stubble burning returns to contribute to air pollution across India’s northern plains.

However, to curb the menace during the paddy harvesting season, Punjab — the key grain producing State — is all set this year to promote paddy straw as a “resource to create wealth”.

The State government is working to present ‘paddy straw’ as a resource that creates value and wealth for industry and the farming community, rather than being a waste product of paddy cultivation.

While farmer outfits have welcomed the move, some industry bodies have their reservations.

The government recently decided to permit certain categories of industries to install paddy straw fired boilers, for which the industries will be given fiscal incentives. The industries included in this scheme are sugar mills, pulp and paper mills, besides any industry having boiler installation with steam generating capacity more than 25 tonnes per hour (TPH). Also, new and existing units of distilleries and breweries, proposing replacement of old boilers or expansion with installation of new boilers, are required to use paddy straw as fuel in boilers.

To spur the offtake of straw, the government has decided to provide cumulative fiscal incentives of ₹25 crore to the first 50 existing industries on ‘first come first serve’ basis. Besides, the government has also approved non-fiscal incentives to industries in terms of availability of ‘panchayat’ land for storage of paddy straw with lease agreement of upto 33 years.

Asserting that Punjab is very seriously cognizant of the stubble burning issue, Chief Secretary Vini Mahajan, told The Hindu that Punjab is taking all measures possible to promote both in-situ and ex-situ management of paddy straw.

“For ex-situ management in particular we have come out with innovative measures. Under this, to promote the use of paddy straw in boilers as fuel, several incentives are being extended to the industry. We look forward to the industry to respond positively to these measures so that we are able to productively use this biomass. We are hoping that paddy straw can be demonstrated as reasonably good source of energy. We have been in touch with the Power Ministry to request that NTPC should also increase the use of paddy straw in their thermal plants as it would immensely be helpful in dealing the menace,” Ms Mahajan said.

The paddy crop, which is harvested with combine harvester machines leaves behind a stubble in the farm. To destroy this stubble many farmers find burning the residue the most effective and cheap method as they want to prepare their fields for the next winter crop. The short time-window between paddy harvesting and sowing the wheat crop — just about three weeks — is one of the primary reasons why farmers resort to stubble burning.

In Punjab and Haryana, the paddy harvesting is usually done between second half of September till October end. The sowing of wheat crop normally starts from first week of November and continues for over a month and a half.

Krunesh Garg, member secretary of the Punjab Pollution Control Board said the whole idea behind promoting ex-situ management is to present ‘paddy straw’ to the industry and the farmers as a resource that creates value and wealth.

“The government should purchase and process the stubble from farmers and provide it to the industry free of cost. Also, the paddy straw contains silica, and hence the metallurgy for boilers needs to be chrome based, which makes it costlier,” he said.

Jagmohan Singh, general secretary of the Bhartiya Kisan Union-Ekta (Dakonda) welcomes the government’s decision. “It’s a positive step and but its success shall depend only if the farmer is given a suitable price for the stubble,” he said.

Despite the ban on stubble burning and action against those burning crop residue under the Air (Prevention and Control of Pollution) Act, 1981, year after year farmers continue to resort to the practice, claiming lack of alternatives.

It is estimated that over 15 million tonnes of paddy straw is burnt in the open fields ahead of the winter sowing.