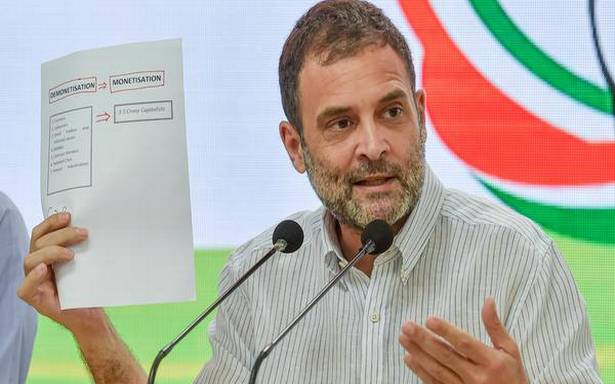 As a cuckoo does not build her nest and seeks comfort in nests of other birds, Rahul Gandhi also works in a similar manner, Mr. Patra said.

With Rahul Gandhi attacking the government over the farmers’ protest, BJP’s Sambit Patra on Monday dubbed him as a “political cuckoo of Indian politics” who, it alleged, does not want to work on the ground and uses the shoulders of others for his political agenda.

BJP spokesperson Mr. Patra also accused the Congress leader of posting an old picture of farmers’ protest while referring to their Sunday mahapanchayat in Uttar Pradesh’s Muzaffarnagar district, and said this is part of his politics of “spreading confusion and lies”.

“The Congress is without a (regular) president. It is incapable of raising ground issues. That is why Sonia Gandhi holds virtual meetings with leaders of other parties while Rahul Gandhi relies on old photographs in his attempt to spread confusion for politics,” Mr. Patra told a press conference.

Sonia Gandhi is the interim president of the party.

As a cuckoo does not build her nest and seeks comfort in nests of other birds, Rahul Gandhi also works in a similar manner, he said.

With protesting farmer unions hitting out at the government, Mr. Patra claimed that the Modi dispensation was always dedicated to farmers and will remain so.

He cited a number of measures taken by the government, including direct transfer of over ₹1.5 lakh crore to farmers, and record procurement and payment for their produce, to make his point.

Citing the Morning Consult survey that ranked Mr. Modi with the highest approval rating of 70% among 13 heads of governments, including Joe Biden and Boris Johnson, Mr. Patra said it was possible because of the government’s achievements, including a host of welfare measures for the poor, deprived and farmers.

At the press conference, the BJP spokesperson also referred to India’s COVID-19 vaccination drive, which has been gathering pace and clocked over one crore jabs on two days recently, and hit out at Rahul Gandhi, who had earlier criticised the alleged slow pace of inoculation.

Over 68.75 crore people have received at least one dose of vaccination, which has reached an average daily figure of 85 lakh, he said.

“Now Rahul Gandhi is not seen posting any tweet on the vaccination drive,” he said.

He also attacked the Congress leader for not speaking out on the alleged rape of a minor in Rajasthan and registration of an FIR against Chhattisgarh Chief Minister Bhupesh Baghel’s father for his remarks allegedly targeting a community.

While Mr. Gandhi spreads “confusion” everywhere for his politics, he has kept quiet on these issues involving the Congress-ruled states, Mr. Patra alleged.