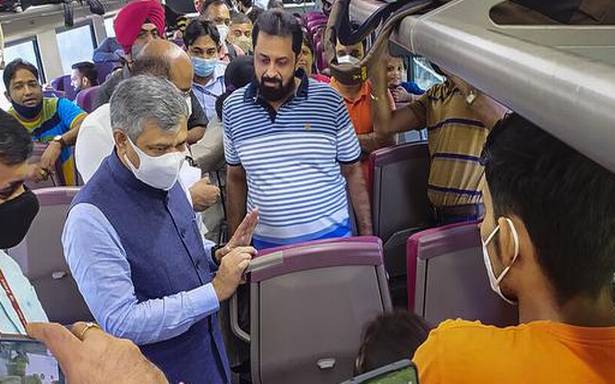 Union Railway Minister Ashwini Vaishnaw on Monday, September 13, 2021, promised that rail link with the Kashmir Valley would be open to the public before 2024, an official spokesperson said.

He said systematic surveys are being undertaken to link the remotest regions of the country through mobile and internet connectivity. Mr. Vaishnaw, who visited the Jammu railway station and a community service centre (CSC) here, took stock of the facilities being provided to the public.

His visit is part of the public outreach initiative of the Union government for Jammu and Kashmir.

The Railway Minister assured that rail link with Kashmir would be open to the public before 2024, the spokesperson said.

He also inspected the Jammu railway station and studied the upgradation plan for the Jammu and Kathua railway stations. Mr. Vaishnaw assured that appropriate steps would be taken to facilitate pilgrims and tourists reaching Jammu and beyond through the railways. On February 14, former Railway Minister Piyush Goyal had set the target for completion of the Katra-Qazigund track project by next year.

"Reviewed the progress of Udhampur Srinagar-Baramulla Rail Link project in Jammu and Kashmir and deliberated ways for early execution. The project will be completed by 2022 and will facilitate ease of transport for the people of Jammu and Kashmir," Mr. Goyal had tweeted.

On December 28, 2020,Northern Railway General Manager Ashutosh Gangal had set the target for completion of the project by December 2022.

"The prestigious project will be completed by the end of 2022," Mr. Gangal had said.

The 272-km railway line is being undertaken at an estimated cost of ₹ 28,000 crore by the northern railway.

Mr. Gangal said that the first section connecting Udhampur to Katra and the third section between Banihal and Baramulla have been completed with both the sections operational.

The work to complete the most difficult Katra-Banihal section is going as per schedule, he added.