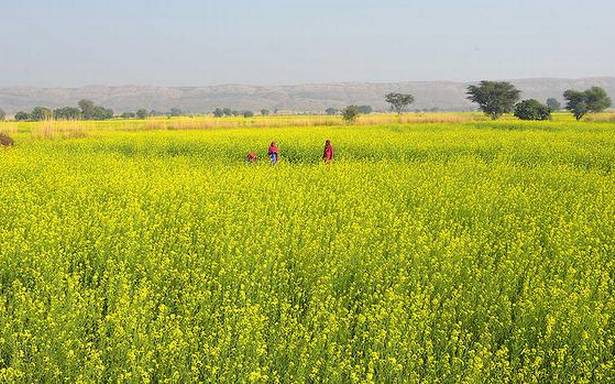 Farmers advised to use alternative compounds for cultivation

Facing an acute shortage of fertilizers during the sowing of rabi crops, Rajasthan has initiated steps to make optimum utilisation of the reserves and advised the farmers to use alternative compounds for mustard and gram crops, which are expected to cover a collective area of 50 lakh hectares. The Congress government has also requested the Centre to sanction more quantity of fertilizers.

Since the supply of diammonium phosphate (DAP) is largely dependent on imports, the gap between demand and supply has widened across the country because of low arrivals, affecting Rajasthan and other States this year. Rajasthan has received only 3.07 lakh metric tonnes of DAP during April to September against the demand for 4.50 lakh metric tonnes.

Agriculture Minister Lalchand Kataria said here on Monday that the farmers had been asked to use the alternate phosphatic fertilizers, single super phosphate and nitrogen, phosphorus and potassium (NPK) compound, to avoid the possible losses because of shortage of DAP. The SSP had been found to be more beneficial for oilseeds and pulses because of sulphur contents, Mr. Kataria said.

Mr. Kataria said he had written a letter to Union Minister of Chemicals and Fertilizers Mansukh Mandavia, pointing out that the Centre had approved only 67,000 metric tonnes of DAP for the rabi crops of 2021-22 in Rajasthan against the demand for 1.50 lakh tonnes during October. “We have faced a shortage of 2.25 lakh metric tonnes so far, though we have been making efforts at every level to provide fertilizers to the cultivators on time,” he said.

The average area of mustard and gram crops is expected to be 30 lakh and 20 lakh hectares, respectively, for which a minimum of 2 lakh metric tonnes of DAP fertilizer will be required.