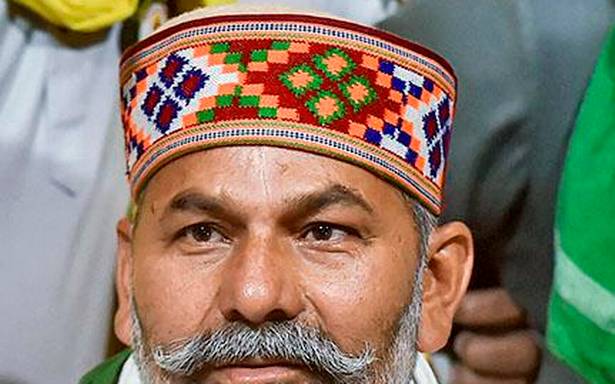 The national spokesperson of the Bharatiya Kisan Union continued his attack on the Centre as he returned home after 383 days of protest at Ghazipur on Delhi’s border.

The bigger issue of minimum support price (MSP) for crops is pending, farmer leader Rakesh Tikait said in Muzaffarnagar on Thursday, as he questioned the intention and policies of the Central government.

The national spokesperson of the Bharatiya Kisan Union (BKU) continued his attack on the Centre as he returned home after 383 days of protest at Ghazipur on Delhi’s border.

The three contentious farm laws were repealed amid continued protests by farmers at Delhi’s borders and in some other parts of the country.

The BKU is a part of the farmers’ collective Samyukta Kisan Morcha which spearheaded the protests that had started at Singhu, Tikri and Ghazipur borders in November 2020 and culminated last week.

Addressing a crowd post-midnight at Soram village, the headquarters of the sarv-khap, in Muzaffarnagar, Mr. Tikait said, “The bigger issue of MSP persists in the country. It will be a great relief if the MSP is granted.” “There is no problem with the crops or farms. You [farmers] toil hard in farms to produce crops, there is no shortcoming on your part. If there is any shortcoming, that is on the part of the governments. The farmers and youth of the country have understood it now,” he said.

“Gadbad agar hai to Dilli ki kalam hai (If there is a problem, it is with the policymakers in Delhi). There farmers are doing their part well,” the BKU leader said.

Mr. Tikait, who returned to Muzaffarnagar late on Wednesday after 383 days, called on the youth to be “prepared for war” as the fight for “zameen and zameer” will continue.

Separately, the BKU leader took to social media to announce support to the two-day nationwide strike by banking professionals over privatisation of banks.

“I fully support the two-day strike by bankers. I also appeal to the countrymen to join this fight against the privatisation of banks,” he tweeted in Hindi.

The BKU said it would be holding its monthly panchayat in Sisauli, the home village of the Tikait family and the union’s headquarters, on Friday to discuss the post-protest issues in the presence of its president Naresh Tikait.