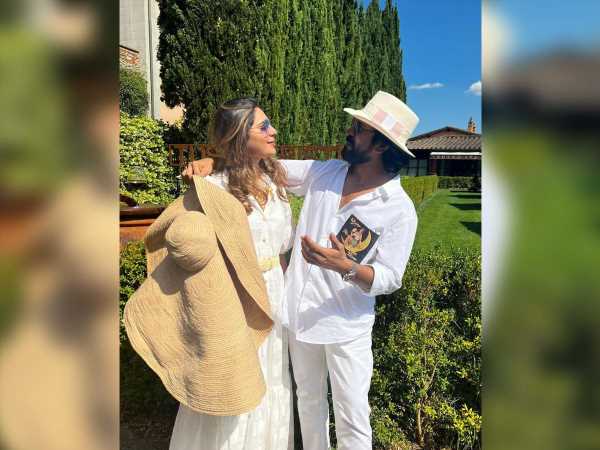 Mega  Power Star Ram Charan and Vice Chairperson of Apollo Hospitals -Upasana Konidela are cherishing the lovely moments of their life in Florence, Italy as the mega couple planned to celebrate their 10th wedding anniversary in Italy.  They are all set to celebrate their 10th wedding anniversary on 14th June.  RRR star  Ram Charan shared their vacation pics with his followers on his Instagram.

His pic clearly gives a hint that  he is capturing the best moments Upasana. They both appeared in white-coloured ensembles.  Ram  Charan is seen wearing a Dolce & Gabbana white shirt with ‘Bring Me To The Moon’! Now, the picture is going viral on social media and mega fans are keeping best wishes and comments on the post.

On Friday, the mega couple was spotted at the airport. Charan was  seen in black jeans and a white t-shirt, which he paired with a white painted jacket features black and white paint on it. He was sporting a beard, along with black sunglasses and white sneakers. Meanwhile,  Upasana was dressed for the European summer in a pleated floral skirt and beige top. Mega daughter in law wore a brown sling bag and coral pink footwear. She had completed her look with a pair of stylish sunglasses.

On the work front, Ram Charan is currently working with Shankar for RC15.