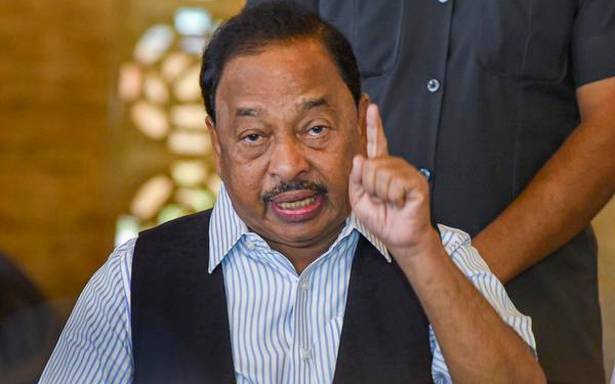 Union minister and BJP leader Narayan Rane on Friday claimed that the Shiv Sena did not have any contribution in the development of Sindhudurg district in Maharashtra and that he was the driving force behind the construction of the Chipi greenfield airport in the coastal district.

The airport is scheduled to be inaugurated by Civil Aviation Minister Jyotiraditya Scindia on Saturday. Maharashtra Chief Minister Uddhav Thackeray and Mr. Rane, both fierce critics of each other, are set to share the stage for the first time in several years at the event.

Addressing a press conference, Mr. Rane, who hails from Sindhudurg district, said the credit for the airport goes to him and the BJP.

"Others can come as guests at the function," he said, apparently referring to Mr. Thackeray.

Mr. Rane, a former Sena man who was also once the chief minister of the state, was arrested in August this year over his comments against Mr. Thackeray. He was later granted bail.

On Thursday, Mr. Thackeray had held a meeting with Mr. Scindia through video link ahead of the inauguration of Chipi airport.

Mr. Rane said the airport was conceptualised when he was the chief minister in 1998-1999.

The airport clearance was given by the then civil aviation minister Praful Patel after I cleared some revenue-related projects of his Gondia district, the BJP leader said, and asked, "Is Shiv Sena anywhere in the picture?" "The Shiv Sena does not even have one per cent contribution in the development of Sindhudurg district and the party is indulging in corruption in the development works there. The Chipi greefield airport is all because of me," he said.

Mr. Rane had left Sena some 15 years back, blaming Mr. Thackeray for his exit. The former chief minister, who had joined the BJP, draws his power from the Konkan belt. The Shiv Sena also has a strong base in the region.

In September 2018, Sindhudurg airport authorities had conducted a trial flight and a 10-seater Falcon 2000 plane with three crew members landed at Chipi.