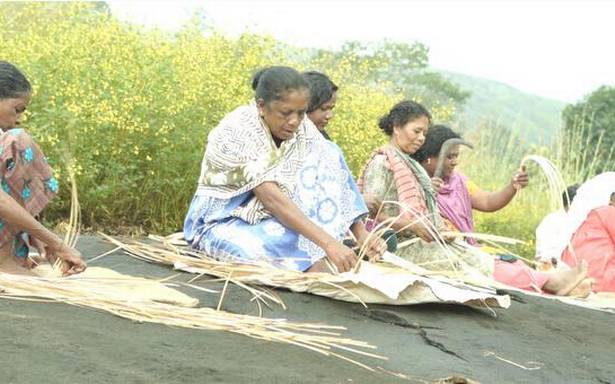 Only three tribes are skilled in making Kannadipaya, a thin and polished mat

It is a mat made of a unique variety of creeper bamboo, so smooth and polished like a mirror. And it is so thin that when rolled, it fits inside a hollow bamboo. Kannadipaya is not an easy product to make and for long, the craftsmanship was confined to three tribes in the Athirappilly-Edamalakkudy belt of the Western Ghats.

The skill was on the verge of disappearing, when a decade ago, the Idukki district panchayat launched measures to revive it. The Plaplavu Unma Scheduled Tribe Bamboo Crafts Unit is now one of the main producers of Kannadipaya. Recently, efforts were launched to fetch the product Geographical Indication (GI) tag through training programmes for the new generation of tribespeople.

For this purpose, the Kerala Forest Research Institute (KFRI) is documenting the specialities of the Kannadipaya and the unique way of making it. The initiative is helmed by KFRI director Shyam Visvanathan and senior scientist A.V. Raghu.

Kannadipaya used to be presented to the kings once. The rare bamboo has to be collected from deep inside the forest. The ‘kannadi’ in the name came by since its surface is as polished as a mirror. The thin mat, on which one person can lie down, is made of the bamboo’s inner layer.

Mr. Raghu says Urali, Mannan, and Muthuvan tribes are proficient in the craft. The creeper bamboo is identified as Teinostachyum Wightii (Munro), locally known as Njoonjeetta. Variants such as Muthureetta and Kareetta of the same family are also used.

Parukutty Koramban, an elderly woman familiar with the craft, says a Kannadipaya is the result of many days’ strenuous work. “The selection of bamboo and its chiselling needs skill,” she says, adding that she had to sell the valued product for paltry sums. Because of the hard work involved, the younger generation are not very keen on mastering the craft, she says.

C.R. Elsy, retired head of IPR cell, Kerala Agriculture University, says the craft needs to preserved. “The product should be marketed well. Since the mat is handmade, the tribespeople should get a price commensurate with the effort,” she says.

The GI tag would prompt tribespeople to make miniature forms of the mat, such as table mats and curtains, which can be given as gifts, she adds.