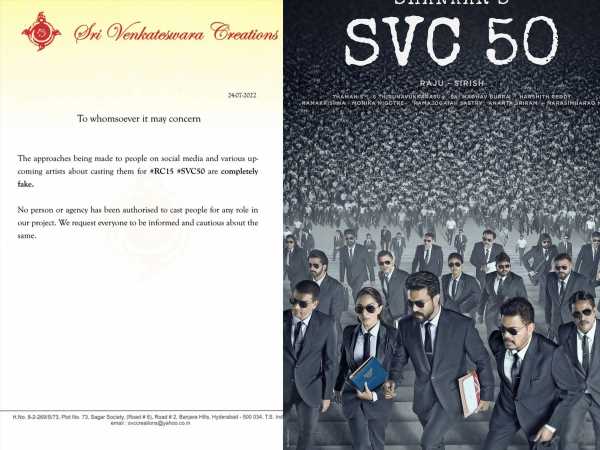 After working with  Baahubali fame SS Rajamouli in RRR, Ram Charan has been extensively shooting for ace director Shankar’s next film, which is tentatively titled as RC 15. The movie is said to be a political drama, on the lines of films like Indian and Shivaji,  and it has Kabir Singh and Bharat Ane Nenu fame Kiara Advani as the leading lady.  According to our sources, Shankar has completed shooting for about 65 percent of the shoot and he intends to wrap up Rc15 by the month of December. Once again RC15 is in news again.

The production house Sri Venkateswara Creations took to social media and responded to the fake news that is spreading about Ram Charan and Shankar’ film RC15. The team released a note that read, “The approaches being made to people on social media and various upcoming artists about casting them for #RC15 #SVC50 are completely fake. No person or agency has been authorized to cast  the people for any role in this project. We request everyone to be informed and cautious about it.”

By releasing this statement, the makers of RC15 debunked the rumors in their style spreading about the addition of a new cast.

Dil Raju’ production venture, which also has Srikanth, Naveen Chandra, Anjali, and others, will be released in 2023.