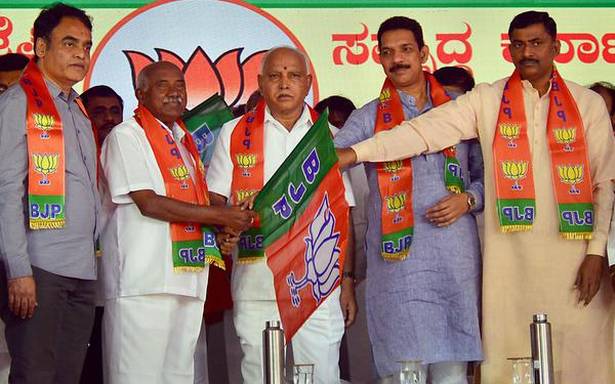 A.H. Vishwanath, MLC, took on the Lingayat seers who have cautioned the BJP leadership against replacing Karnataka Chief Minister B.S. Yediyurappa and urged them to refrain from politicking. The MLC is known to be inimical to Mr.Yediyurappa.

Addressing mediapersons in Mysuru on Wednesday, the MLC said that mutts should confine themselves to religious activities and not become a hotbed of politics. It is not correct for mathadipathis (religious heads) to take a political stance and support any individual on the basis of caste or community, he added.

“Leave politics to politicians, and don’t bring politics into religion,” said Mr. Vishwanath stating that there should be righteousness, or dharma, in politics.

“Seventeen MLA, who joined the BJP to facilitate formation of the government in Karnataka, are not Lingayats, and none of us joined the BJP because Mr. Yediyurappa is a Lingayat,” said Mr. Vishwanath. Religious leaders should emulate the late Siddaganga seer (Dr. Shivakumara swami) and try to be a ‘walking God’ and not ‘walking politicians’, he added.

He said none of the mathadipathis, who are backing Mr. Yediyurappa now, supported him when he was imprisoned or when he was suspended from the party. If the BJP won 104 seats in the Assembly elections in Karnataka, it was because of Prime Minister Narendra Modi. But the present State government under Chief Minister B.S. Yediyurappa is promoting family interests, which goes against the party’s avowed principles, he said.

Recalling the history of BJP in Karnataka, Mr.Vishwanath said A.K. Subbaiah built the party. He described Mr. Yediyurappa as a ‘municipality leader’ who has ‘surrendered his senses’ to his son (B.Y. Vijayendra, vice president, Karnataka BJP unit).

He called upon Mr. Yediyurappa to ‘make a dignified exit from politics’. Citing the the names of former chief ministers Nijalingappa, Devaraj Urs, H.D. Deve Gowda, S. Bangarappa, S.M. Krishna and Siddaramaiah, Mr. Vishwanath said, “All of them tread their own path, and were not desperate to hang on to the post of CM.”