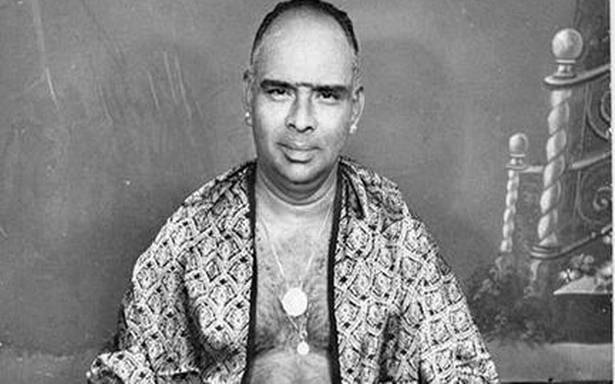 Valangaiman, a town in Thiruvarur district, gets its name from the fact that Lord Siva in the temple there holds a deer in his right hand. It is a rare idol. In the world of Carnatic music, it occupied an important place because of thavil player Valangaiman Shanmugasundaram Pillai, whose birth centenary is being celebrated this year. To keep alive the memory of the maestro, Parivadini, a charitable organisation promoting music, has released a table calendar.

“He exemplified a traditional thavil maestro — both in his way of playing the instrument and physical appearance. Clarity was his forte,” said thavil maestro T.R. Govindarajan.

Interestingly, Shanmugasundaram Pillai was not born in Valangaiman. His birthplace is Segal Madappuram near Thiruthuraipoondi. His family moved to Sri Lanka when he was a child. After establishing a career in music there, he came back to India to learn from Nachiar Kovil Raghava Pillai. Valangaiman became inseparable from his name after he settled there. Though he played for all great nagaswaram players, for almost 30 years he accompanied Sheik Chinna Moulana.

He was a trendsetter when it came to accompanying other instruments. He first played for flute Mali and N. Ramani. “He came forward to play for Mandolin Srinivas and the combination created a wave in the music world. His concerts with violinist L. Subramaniam and his brothers are also well received. He even played for T.N. Seshagopalan in his vocal concerts,” said Mr. Govindarajan.

Srinivas had acknowledged how Shanmugasundaram gave a fillip to his career in the initial years. The way he controlled the instrument to produce soft sounds to suit instruments other than nagaswaram was amazing. “He accompanied me when I was a boy and told me not to be overawed by his presence. ‘Let us see what we can do together’ was the word of encouragement,” recalled nagaswaram player Injikudi E.M. Subramaniam. “He was a team player and elevated the concert together with other musicians. The way he played during raga alapana is something unique, and now that style has almost disappeared,” he said.