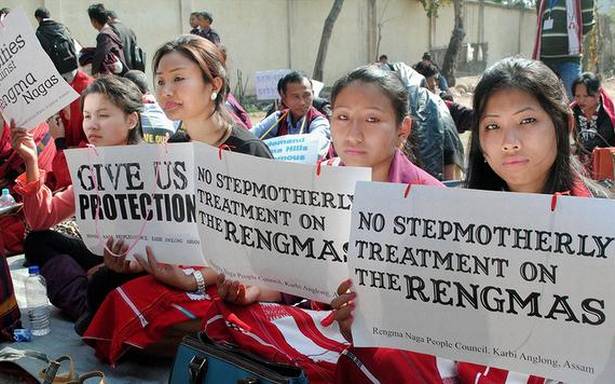 The Rengma Nagas in Assam have written to Union Home Minister Amit Shah demanding an autonomous district council amid a decision by the Central and the State governments to upgrade the Karbi Anglong Autonomous Council (KAAC) into a territorial council.

The Rengma Naga Peoples’ Council (RNPC), a registered body, said in the memorandum that the Rengmas were the first tribal people in Assam to have encountered the British in 1839, but the existing Rengma Hills was eliminated from the political map of the State and replaced with that of Mikir Hills (now Karbi Anglong) in 1951.

Narrating its history, the council said that during the Burmese invasions of Assam in 1816 and 1819, it was the Rengmas who gave shelter to the Ahom refugees.

The petition said that the Rengma Hills was partitioned in 1963 between Assam and Nagaland at the time of creation of Nagaland State and the Karbis, who were known as Mikirs till 1976, were the indigeneous tribal people of Mikir Hills.

“Thus, the Rengma Hills and Mikir Hills were two separate entities till 1951. Karbis have no history in the Rengma Hills. People who are presently living in Rengma Hills are from Assam, Arunachal Pradesh and Meghalaya. They speak different dialects and do not know Karbi language of Karbi Anglong,” the memorandum said.

RNPC president K. Solomon Rengma told The Hindu that the government was on the verge of taking a decision without taking them on board and thus they had written to Mr. Shah and Chief Minister Himanta Biswa Sarma.

“How can they do this? We have been writing to them for many years. The KAAC population is around 12 lakh and the Karbis constitute only 3 lakh, the remaining are non-Karbis, including the Rengma Nagas, whose population is around 22,000. We are also demanding a separate legislative seat for Rengmas,” he said.

The National Socialist Council of Nagaland or NSCN (Isak-Muivah), which is in talks with the Centre for a peace deal, said in a statement on Monday that the Rengma issue was one of the important agendas of the “Indo-Naga political talks” and no authority should go far enough to override their interests.

More than 3,000 Rengma Nagas were forced to relocate to relief camps in 2013 after several people were killed in a series of attacks following a call given by a Karbi insurgent group.

The Centre is likely to finalise a peace pact with the six Karbi insurgent groups and one of them- the KLNLF signed a suspension of operation in 2009 with the Assam government.

The Sixth schedule of the Constitution protects tribal populations and provides autonomy to the communities through creation of autonomous development councils that can frame laws on land, public health, agriculture and others. As of now, 10 autonomous councils exist in Assam, Meghalaya, Tripura and Mizoram. The specified tribal areas are the North Cachar Hills, Karbi Anglong and the Bodoland Territorial Area in Assam. The Karbi Anglong Autonomous Council has 26 seats and elections are due in 2022.