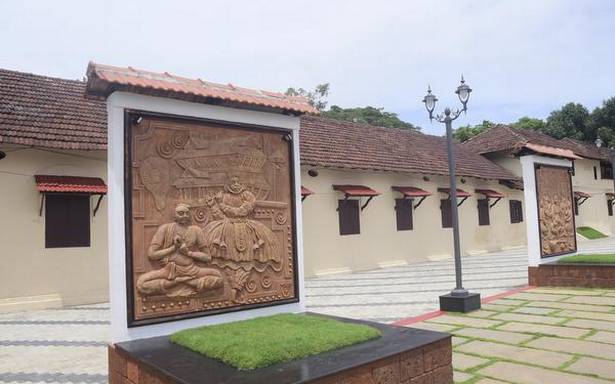 Mural paintings showcasing history and heritage of the Zamorins among attractions

A clear pond with two bathing ghats, granite bleachers on the sides, and a sturdy wall around — the Tali pond in Kozhikode is no more what it used to be.

The pond, attached to the Tali Mahadeva temple, has got a facelift under the Tali Heritage Project executed by the District Tourism Promotion Council (DTPC). Minister for Public Works and Tourism P.A. Mohamed Riyas threw open the renovated pond to the public on Friday.

Besides securing the boundaries of the pond, the project included art works on the eastern side of the pond, close to the Zamorin’s Higher Secondary School.

In an attempt to preserve the heritage of the Zamorins for future generations, eight relief murals have been made on eight different walls, depicting various scenes related to the history of the Tali temple. The first of the cement murals made by artists Nibin Raj and Shijish Atholi depicts the coronation ceremony of the Zamorins known as ‘Ariyittu Vazhcha’ while the second shows the visit of a Zamorin to Tali temple after coronation. ‘Mamangam’, a martial art competition between the Nair warriors of Malabar with the Zamorin’s troops every 12 years on the banks of the Bharathapuzha at Thirunavaya; ‘Revathi Pattathanam’, a traditional battle of knowledge held at the temple; a myth connecting poet Poonthanam and Zamorin’s prime minister Mangattachan; Thyagaraja music festival held at Tali every year; Krishnanattam, a precursor to Kathakali said to be written by a Zamorin king (Manavedan); and ‘Brahmansadya’ are depicted on the other six walls.

The granite pathway between the pond and the school and the LED wall at the far end of it are also recent additions. A platform below the banyan trees has been renovated and a herb garden has been set up on the roadside next to the temple. The whole area has been aesthetically lit up too. A museum and a library on the premises are in the pipeline.

The project was designed by A.K. Kasturba, head of the department of architecture at the National Institute of Technology, Calicut, and overseen by Nirmithi Kendra. It was completed at a cost of ₹2 crore, partially funded by the DTPC and the local MLA.