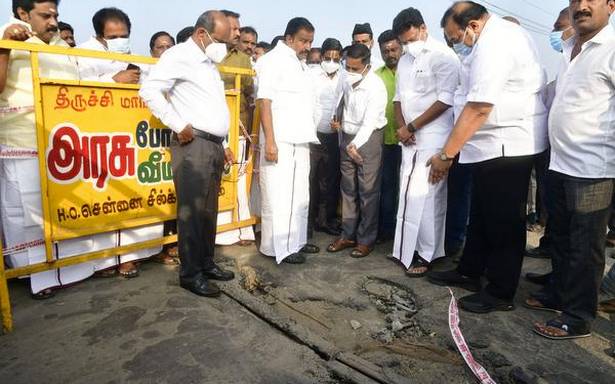 Minister for Municipal Administration K.N. Nehru on Tuesday said that the old Cauvery bridge, which had developed huge gaps at expansion joints, between Mela Chinthamani and Mambazhasalai would be repaired soon.

He told reporters after inspecting the bridge that it was being used since 1976. It had suffered damage on various joints due to poor maintenance during the previous AIADMK regime. Considering the importance of its usage, it had been decided to carry out repairs.

A Governor Order, sanctioning ₹6.5 crore, had been issued. The work would begin shortly, according to Highways Department sources.

Mr. Nehru said that the process of preparing a Detailed Project Report (DPR) for constructing a new bridge, adjacent to the existing bridge, was over. It is estimated to cost ₹130 crore. It required no land acquisition process. Steps had been taken to complete other formalities to construct the new bridge across the Cauvery as early as possible, he said.