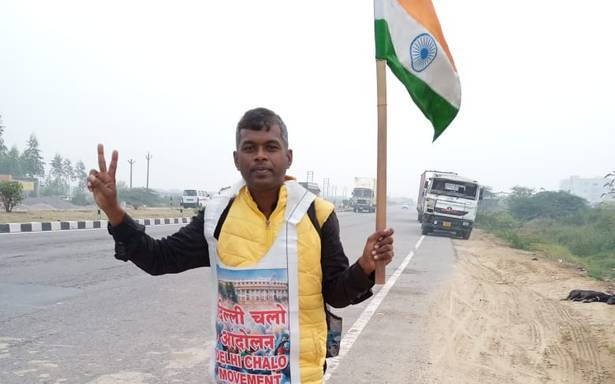 Prime Minister Narendra Modi’s announcement to withdraw the three controversial farm laws has left Nagaraj Kalkutagar with a sense of contentment. He has been on a solo march from Karnataka to the protest site in Delhi. When he received news of the PM’s decision, he was walking towards Delhi from Mathura in Uttar Pradesh.

“A friend of mine from Delhi informed me over the phone. A few passers-by also stopped to inform me about the development. They suggested I end this long march, as the demand of farmers has been accepted. I am happy. At least, after so many days, the government has responded to the protest,” Nagaraj told The Hindu over phone.

He will take a decision on withdrawing his solo agitation after talking to leaders of Samyukta Kisan Morcha. “Anyhow, I will reach Delhi and visit the sites where farmers staged a protest for more than a year,” said Nagaraj.

The 39-year old is a former techie. He began his unique protest against the farm laws at Male Mahadeshwara Hills in Chamarajanagar district on February 11 earlier this year. With a backpack and a bottle of water, he walked with the objective of meeting and interacting with as many people as possible about the farm laws.

He has covered 5,070 km so far. Occasionally, he travelled by vehicles to cross risky stretches

“I have been walking for 185 days and I have interacted with thousands of people. One more meeting is scheduled in a school later today,” he said on November 19.

He had to take a break when the Karnataka Government announced a lockdown during the second wave of COVID-19 in April and resumed his journey on July 3. He took three days’ break again earlier in November when his mother passed away.