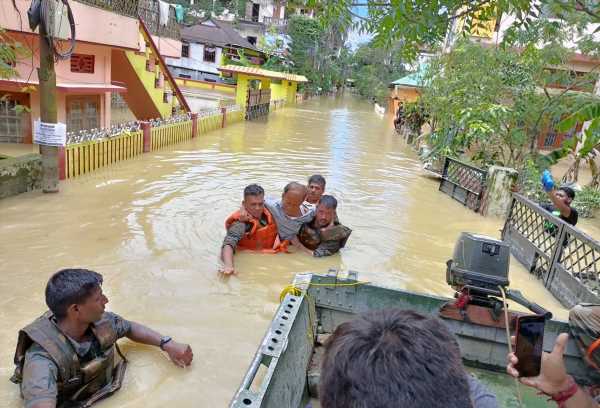 Bright orange-coloured lifeboats navigating through brackish floodwaters, with rescue personnel on them holding out food packets and jackets, are the only beacons of hope for Assam’s marooned population struggling to stay afloat, having lost their homes and, in some cases, loved ones.

Nearly 86 lakh people in the state’s 32 districts have been affected by heavy rain and subsequent floods this year, bringing life to a screeching halt in many parts.

More than 150 people have died so far.

Sixty-eight-year-old Manjurani Nath, a diabetic, had been at her wit’s end trying to find a way to move to safety with her ailing husband in Silchar town, one of the worst-affected areas, when National Disaster Response Force personnel reached out to her with aid.

Nath, who had been reeling under flood with water having entered her home, said the food and other amenities provided to them by the NDRF personnel, after a long wait, was nothing short of “manna from heaven”.

In Lower Assam’s Barpeta district, Sabera Begum and her family of five in Rupakuchi village had lost many of their belongings that got washed away in the flood waters, but they have held on to each other amid the crisis.

“That we got a chance to escape without any scratch or injury is no less than a miracle, thanks to the rescue personnel,” she said.

A total of 97,993 people have been evacuated over the past weeks from the flood-affected areas of Brahmaputra and Barak river basins by the personnel of NDRF, State Disaster Response Force, Army and paramilitary forces, with support from policemen, fire brigade officials and trained volunteers.

Santosh Singh, the assistant commandant of an NDRF 01 battalion, said its personnel have been maintaining tactical positions in the vulnerable districts of the flood-prone state.

“Since May, we have been in tactical positions in the vulnerable districts of Jorhat, Bongaigaon, Barpeta and Cachar. As the situation worsened (in June), we moved to the Central Assam districts of Nagaon, Hojai and Morigaon,” he said.

Currently, NDRF has 22 teams deployed in Assam, with nine in Silchar, he said.

“As many as 600 trained personnel are engaged in evacuating marooned people with night-long operations underway in some of the affected districts. More than 20,000 people have been evacuated and nine saved from drowning,” he stated.

A medical team that accompanies the rescue personnel provides “pre-hospital responses” to the affected population, including pregnant women and elderly citizens, Singh explained.

“Challenges are many, particularly in the midst of strong water currents and sudden flash floods. Our teams are very motivated, nevertheless. They are working round the clock to rescue people, sometimes risking their own lives,” he added.

The Indian Air Force had been air dropping food packets, drinking water bottles and other essentials in the affected areas. It has also airlifted at least 300 people in Silchar and moved them to safety.

Assam director general of police Bhaskar Jyoti Mahanta said that the SDRF, fire and emergency services along with other police personnel are also rescuing people on war-footing.

“Two of our men were washed away during a rescue mission in flooded villages. Their bodies were recovered the next day. Our police personnel work silently. Only when such a tragedy strikes, their hard work and sacrifices come to light,” he said.