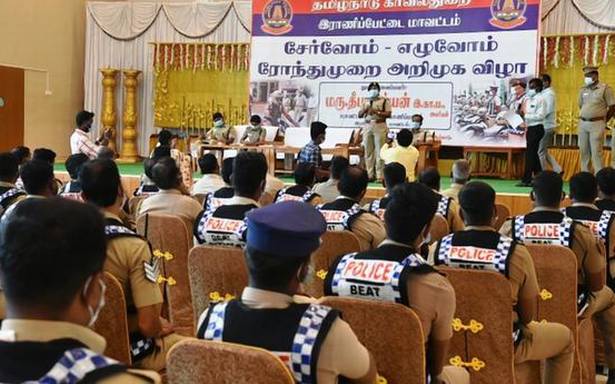 In an initiative to bring residents closer to police personnel, a dedicated beat policing system was launched by the Superintendent of Police, Deepa Satyan, in Arcot on Saturday.

The initiative is aimed at having more interaction with the residents not only to prevent crime but also help them highlight their civic issues such as defunct street lights, pot-holed streets and leaky water pipelines to the district administration.

Termed the Reach and Raise Beat System (R&RBS), the initiative makes it mandatory for the beat police personnel to have interaction with residents on a daily basis. Every day, on an average, the beat policeman should have connected themselves with 10 residents. The team, which consists of two constables, should get basic details including name, phone number, address and family details of residents. In return, the team should give their mobile numbers and helpline numbers to residents. The data about residents will be compiled at the SP office on a daily basis ensuring the district police to have basic details of residents in three months. “This is also a step to bring residents and police personnel closer, not just for policing alone, but also to bring basic facilities in the neighbourhood. The objective is to know the pulse of the residents,” Ms. Satyan said.

Unlike the existing beat policing where policemen mainly interact with traders, petty shopkeepers and autorickshaw drivers to get alerts, the new initiative insists that the team visit only residential areas. The residents get an opportunity to meet the police daily. They can inform them about various crimes including robbery, illegal sale of ganja, gutka, lottery, arrack and sand smuggling. They can also report public nuisance, traffic congestion, rowdyism and physical abuse.