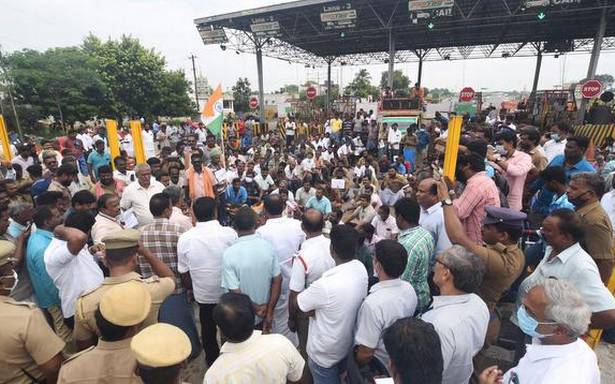 Tahsildar says exemption from toll will continue for local vehicles

Residents of Tirumangalam, T. Kallupatti and Peraiyur on Thursday blocked the toll plaza maintained by National Highways Authority of India at Kappalur near Tirumangalam for over 30 minutes, protesting against NHAI’s proposal to charge toll even for local vehicles that were hitherto exempted.

However, after revenue and police officials held talks and assured them that toll exemption to local vehicles will continue till further orders, the protestors dispersed.

A police source said that the agitators did not block emergency vehicles from passing through the toll plaza. As a precautionary measure, the police had diverted heavy vehicles and buses on Madurai-Virudhunagar highway through Tirumangalam-Ring Road and through Uchapatti.

Kappalur Industrialists’ Association president P. N. Raghunatha Raja said that the very location of the toll plaza between Tirumangalam town and Madurai was in violation of the NHAI norms. “Firstly, it violated the minimum distance of 60 km between two toll plazas as the distance between Kappalur toll plaza and the one at Chittampatti on Madurai-Tiruchi highway is only 48 km,” he said.

Besides, the NHAI had not obtained permission from Tirumangalam municipality for locating the toll plaza within 500 metres of the town boundary. “As per norms, the toll plaza can be located only 10 km away from any urban local body,” Mr. Raghunatha Raja said.

Similarly, no toll collection facility should be located near a flyover, whereas the Kappalur toll plaza was in close proximity to a flyover.

The High Court had, in the past, ordered shifting of the toll plaza to a place south of Tirumangalam town. But the NHAI had got an order in its favour misguiding the Supreme Court, he said.

Tirumangalam Tahsildar A. Anandakrishnan said, “We have told the agitators that the exemption for local vehicles will continue as decided at a peace meeting chaired by the Collector.”

Minister for Commercial Taxes P. Moorthi had asked NHAI officials to continue with the present arrangement so that there was no law and order problem in Tirumangalam.

The issue snowballed again after the NHAI recently sought police protection for the toll plaza as it had proposed to charge all vehicles, including local vehicles, with effect from November 24.