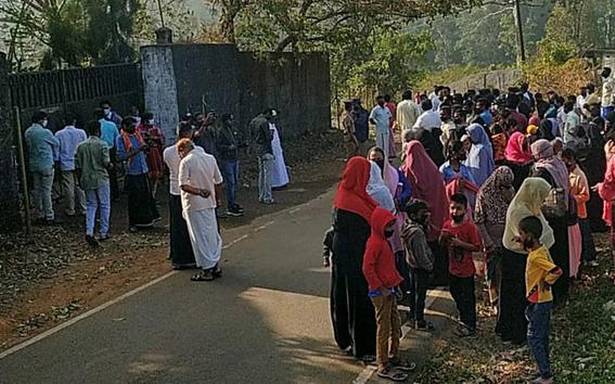 It will cause air pollution and affect people’s health, they say

Residents of Devala near Gudalur staged a protest against attempts to reopen a tar manufacturing unit, citing health concerns on Wednesday.

They alleged that the unit caused air pollution in the area and affected the health of local residents. “The factory was already closed down a few years ago due to the concerns raised by the residents. However, the owner, who claims to have political connections, is attempting to reopen the factory despite local opposition,” said R. Dharman, a local resident and one of the protesters.

In support of the agitation, local business owners as well as taxi drivers refused to operate on Wednesday. Residents raised slogans demanding that the facility be closed permanently. “When the plant was functioning a few years ago, many residents developed breathing issues and other health problems. Apart form affecting children and elderly people, the plant will also affect the environment,” said another protester.

Officials from the revenue department in Gudalur said the Tamil Nadu Pollution Control Board had granted permission for the plant to reopen with a set of strict conditions. However, officials were unable to verify whether the conditions were met by the manufacturing plant.

On Wednesday, the owner of the plant mobilised the workforce at the plant and attempted to start it. However, after the protests, the district administration stepped in and ordered its closure till the checks are completed.

When contacted, the Nilgiris district Collector, S.P. Amrith, said he would visit the plant and check whether the conditions specified by the TNPCB had been met. “Only after the checks are completed will the plant be allowed to function,” he said.