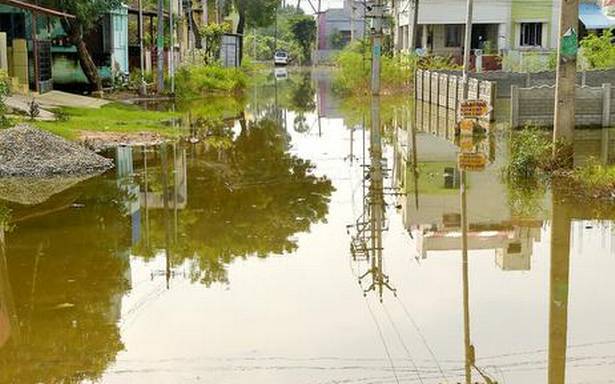 Residents in Woraiyur Fathima Nagar are a worried lot

Several houses in Woraiyur Fathima Nagar and a few other residential colonies close to the Kudamuritti were inundated afresh in the city following a rise in flow in the river since Sunday.

Affected residents are worried and complain that the water was heading up into the residential colonies on the right bank of the Kudamuritti through a drainage sluice.

Fathima Nagar and M.M. Nagar are among the places that were inundated in the city about 10 days ago after heavy rain in Viralimalai and Keeranur (in neighourbing Pudukottai district) and Manapparai areas brought heavy discharges into the Koraiyar and ultimately into the Kudamuritti which drains into the Cauvery river in the city.

Residents in Fathima Nagar and other places heaved a sigh of relief after the water receded two or three days ago. But the sudden inundation again on Sunday caught them by surprise. “The water started flowing from the sluice from Sunday afternoon and there is knee-deep water in some parts of the colony,” said Safiullah, a resident.

According to sources in the Public Works Department, the water flow in the Kudamuritti increased on Sunday due to heavy discharge from Ariyar in Pudukottai district.

“However, steps have been taken to reduce the flow in Kudamuritti. We have opened the sand vent at Kodingal upstream to prevent the problem at Fathima Nagar. The water has started draining from the colonies,” said an officer.

According to representatives of Fathima Nagar Welfare Association, about 100 houses in three or four streets were the worst affected due to the latest inundation.

“Just about 10 days ago, we saw heavy and widespread inundation. Now, with water level rising in the Kudamuritti, the water is heading up through a drainage sluice near Karalamman Temple,” said a resident.

The only solution is to clear encroachments on existing drainages such as Kathirikai Vaical and build a new drainage with a treatment plant. Residents also demand removal of silt from Kudamuritti and strengthening of its banks.

Another representative points out that waterlogging has been a recurrent problem for more than two decades in places such as Fathima Nagar, Nova Colony, RS Puram, Beschi Nagar, AUT Colony, Thyagaraja Nagar with over 1,400 houses. Further downstream, Lingam Nagar and nearby residential areas on Kuzhumani are routinely affected.

Following the monsoon rain, the already poor roads inside Fathima Nagar have taken a heavy beating and some of the cross streets are unmotorable. Water is still stagnant on many of the cut roads and vacant plots.

Residents of both Fathima Nagar and Lingam Nagar say that Local Administration Minister K.N. Nehru, while visiting the places after the recent inundation, promised to take steps to check waterlogging and execute measures worth about ₹100 crore.

“The Minister visited our locality and revealed a plan to check inundation. We look forward to the implementation of the plan at the earliest,” said V. Thirugnanasambandam, secretary, Lingam Nagar Residents Welfare Association.

However, many residents say that the main issue is clearing encroachments from canals.

“The city has a network of drainages. The civic authorities should come out with a map of the drainages and clear the encroachments and silt accumulation to find a permanent solution to the recurrent problem,” said K. Suresh, former city secretary of the Communist Party of India.