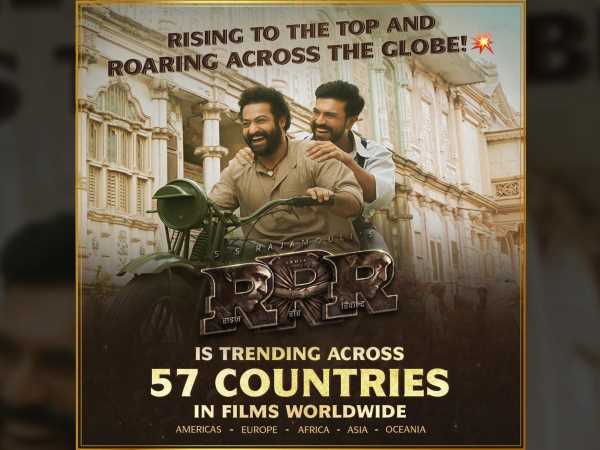 SS Rajamouli’ directorial venture RRR starring Young Tiger Jr NTR and mega Power Star Ram Charan released a few months back in theatres around the world and rocked the box office.  The big  budget Pan India film made around Rs 275 cr from its Hindi version in India and close to Rs 1200 cr at the worldwide box office. RRR, which is bankrolled by DVV Danayya under the banner of DVV Entertainment, also became one of first mainstream Indian films to have garnered such a massive response from the film critics and audiences in the US.  According to the latest report, RRR is currently trending in as many as 57 countries worldwide on Netflix in the films category.

The statement from the makers read,  “The RRRoar keeps getting louder and louder @ssrajamouli’s Epic Blockbuster #RRRMovie continues to trend across 57 countries on @Netflix in films worldwide!”

Rajamouli’ RRR is proving to be a huge blockbuster on OTT.  Recently Netflix also said in a tweet that RRR has shattered the all-time global record for a non-English film and has become the most watched on the OTT platform.