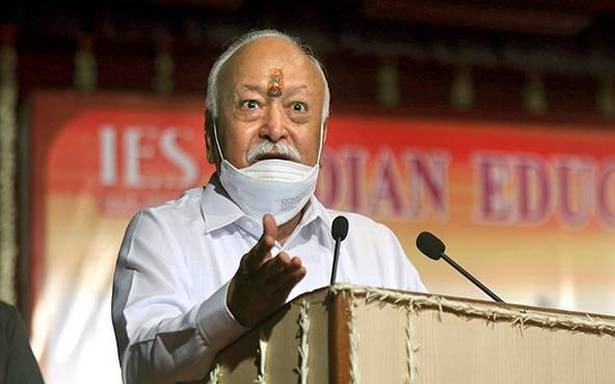 On Saturday and Sunday, the RSS chief would meet officials of various branches of the party in Jharkhand.

Rashtriya Swayamsevak Sangh chief Mohan Bhagwat on Friday said the target of the organisation should be to reach every household when it will celebrate its centenary four years later, according to an RSS office-bearer.

The RSS chief who reached Dhanbad on Friday on a three-day visit to take stock of the organisation in Jharkhand held a meeting with senior leaders of Jharkhand and Bihar.

“The sarsanghchalak (Bhagwat) exhorted us to work hard in order to ensure that when the organisation will turn 100 in 2025, the swayamsevaks should reach every household with extension of branches in all villages,” an RSS functionary who attended the meeting said.

RSS members were also told how their conduct should be and how their lives should be devoted to nation-building, the office-bearer said.

The RSS Chief is scheduled to address media on Saturday.

Earlier, Bhagwat was given a rousing welcome by state BJP leaders, and ABVP and Bhartiya Mazdoor Sangh activists as he reached Dhanbad from Patna on the Ganga-Damodar Express in the morning.

The organisers took him to a guest house, the main venue for the programmes during his visit.

“He holds meetings for organisation extension across the country round the year. During the visit to Dhanbad, he will conduct such meetings,” an RSS functionary said.

On Saturday and Sunday, he would meet officials of various branches of the state RSS.

During the visit, he is also scheduled to meet 100 eminent people from different fields.