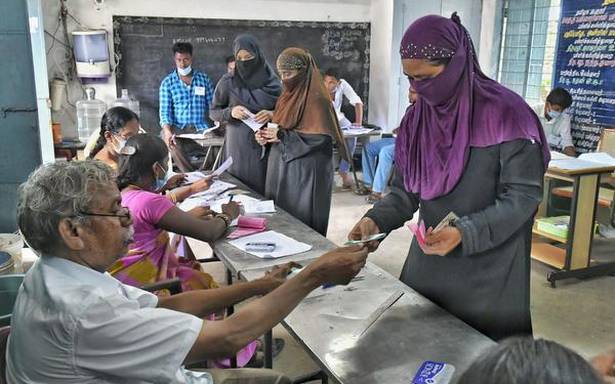 Polling for the second phase on Saturday began peacefully; Villupuram registered the highest morning turn-out at 32.41%

Nearly 26 per cent of electors, numbering around nine lakh, exercised their franchise during the second phase of polling for elections to rural local bodies in nine districts. This was the position as at 11 a.m. on Saturday, according to the TN State Election Commission.

Villupuram has registered the highest turn-out so far at 32.41%. Voting began at over 2,300 polling booths amid tight security. Polling was brisk with people turning up in large numbers. There were long queues, especially of women, at most polling stations since morning.

In Kallakurichi, adequate security has been posted at 52 polling booths, classified as sensitive, according to District Collector-Election Officer P.N. Sridhar.

By-elections to 424 posts of the rural local bodies in 28 other districts saw about 3.8 lakh persons, accounting for 31.53% of the electors casting their votes. Permbalur, where the by-elections are going on for three village panchayat wards, recorded 41.51% turnout. The other two top districts were: Karur – 39,15% and Tiruchi – 37.38%