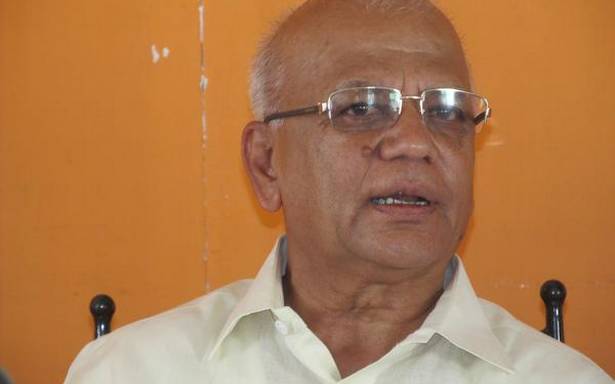 Of the 20 candidates named, only four are the party’s incumbent MLCs

Throwing up many surprises, the Congress on Monday evening released its list of 20 candidates for the Legislative Council elections, with several new faces figuring on it. One of the biggest surprises was Leader of the Opposition in the Legislative Council S.R. Patil being denied the ticket to contest from Vijayapura-Bagalkot Local Authorities’ constituency. Of the 20 candidates, only four are the party’s incumbent members in the Council.

Sources said though the Congress held both the seats in the dual-member constituency of Vijayapura-Bagalkot, it was believed that the ticket would be given to four-time MLC Mr. S.R. Patil and the other Congress member, Sunilgouda Patil, brother of former Minister M.B. Patil, would not get the ticket. However, Mr. Sunilgouda Patil was eventually picked. The Congress has a chance of winning one of the two seats, sources said.

KPCC working president Saleem Ahmed, who had played an active role in the elections to the Hanagal Assembly constituency where the Congress candidate Srinivas Mane registered a victory, has been given the ticket to contest from Hubballi–Dharwad. Incidentally, Mr. Mane represented one of the two seats in Hubballi–Dharwad.

While the former Chairman K. Prathapchandra Shetty, elected from Dakshin Kannada, had refused to contest, the party has given the ticket to Manjunath Bhandari. In Mysuru–Chamarajanagar constituency, the party dropped incumbent member R. Dharmasena and instead chose D. Thimmaiah. The Congress is expected to win one of the two seats in both Mysuru and Dakshina Kannada constituencies.

Vijay Singh, incumbent member and son of the former Chief Minister late N. Dharam Singh, has lost out to Bhimrao B. Patil in Bidar. In Bengaluru Urban, Congress chief whip M. Narayanswamy has been replaced by Yousuf Shariff.

In Belagavi Local Authorities’ constituency, where the Congress is expected to win one of the two seats, it has fielded Channaraja Basavaraja Hattiholi, the brother of MLA Lakshmi Hebbalkar. The party has retained incumbent members K.C. Kondaiah (Ballari), S. Ravi (Bengaluru Rural), and R. Prasanna Kumar (Shivamogga).

Meanwhile, KPCC president D.K. Shivakumar told reporters that the names had been cleared after considering the opinion of the local leaders and new faces had been accommodated. Regarding dropping of Mr. S.R. Patil, he said the party had a different agenda behind the decision. “He has not been ignored. It was a decision taken after consultations by senior leaders. It was not an individual decision.”

On Mr. Kondaiah getting the ticket despite opposition from local leaders, Mr. Shivakumar said the former was a senior leader and one who had sacrificed his seat in the Lok Sabha in favour of AICC president Sonia Gandhi.

For the elections scheduled for 25 seats of the Legislative Council from local authorities across the State on December 10, Tuesday is the last date for filing nominations. Of the total 25 members — in the House of 75 members — retiring on January 5, 14 are from the Congress.

Mr. S.R. Patil, Congress veteran, is learnt to be upset after being denied the ticket to contest the Council election.

Sources said while Mr. M.B. Patil was seen as the one who led the movement for separate religion tag for Lingayats, Mr. S.R. Patil had not favoured it. “He recently went to Lingayat mutts in north Karnataka seeking support to the Congress in the 2023 elections, and brought Lingayat seers to lead a movement for the Upper Krishna project. He may have lost out in the jostle for Lingayat leadership space in north Karnataka,” said a source. Mr. S.R. Patil is learnt to be not keen on contesting the Assembly election.