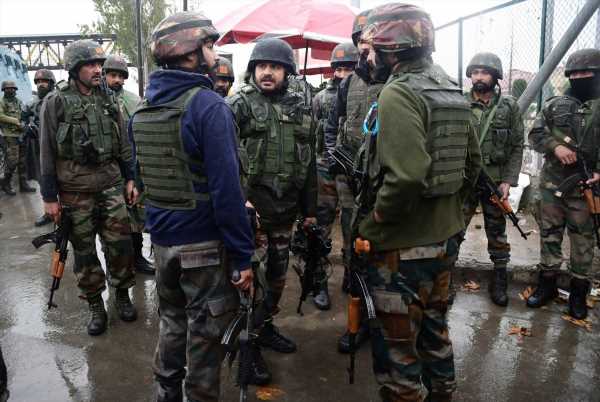 ‘I had emphasised this during our meeting with the PM.’
‘Given our location, I had warned that there is a sensitivity involved as this is a frontier state.’
‘The atmosphere around us is not conducive. But who listens?’

Communist Party of India-Marxist leader Mohammed Yousuf Tarigami — who has been winning election after election in the terrorist-infested constituency of Kulgam in south Kashmir from 1996 onwards — is horrified at the Centre’s decision to deploy an additional 50 security companies of the Central Reserve Police Force and 25 Border Security Force companies in Kashmir.

30 of the CRPF and BSF companies have been deployed in Srinagar city alone. But this increased presence has not seen a let up of increased attacks on the civilian population.

“Where is the normalcy that the government said would return to J&K,”, Tarigami asks Rediff.com Senior Contributor Rashme Sehgal.

The Centre claims it has helped restore normalcy in Jammu and Kashmir.

Let me inform you that since August 5 2019, when the Modi government changed the Indian Constitution, they have been trying to build a narrative that they have restored normalcy to the state.

These claims have been proved wrong. They have misread the situation completely.

They have forced people into silence through the use of draconian laws.

Look at the number of agencies they are using to suppress dissent.

They have the NIA, the ED, CBI along with the increased presence of the security forces.

These are being used to suppress dissent. These agencies have created havoc in J&K.

Hundreds of people have been arrested.

The police stations are full of young people who are being arrested under UAPA (the Unlawful Activities (Prevention) Act).

These agencies have now gained a notoriety which is now known around the world. It is very unfortunate.

In this context I must also emphasise that the situation of our local press is pitiable.

The central government has reduced the leading newspapers published from Kashmir to become little more than government gazetteers.

Media personnel are being subject to tremendous harassment.

Why is this happening? How would you explain the situation?

The situation in Kashmir is altogether different.

The Kashmiri leaders participated in the freedom struggle and though the valley was a Muslim majority area, they opted to become a part of secular India.

Now this same Muslim majority area has become an eyesore for the BJP.

But the government’s indifference to the rights of the people is not confined to J&K.

Look at how the CPI-M offices were attacked and burnt down in Tripura.

Teams of lawyers and journalists who have visited Tripura have been booked under UAPA. But we are witnessing an increase in militancy.

In the Valley, militant activity is continuing because instead of focusing on winning over the hearts of the local people, the central government’s response is to send more and more troops to the valley.

The result is there for all to see.

Where is the normalcy that the government said would return to J&K?

The government had told the country that Article 370 was the reason for militancy. The Valley is now being directly controlled by Delhi and normalcy remains a distant dream.

Normalcy does not mean browbeating the population.

Silencing the population is to our disadvantage and to the advantage of those who want to destroy peace.

There has been an increase of killings in the Valley, but the government is trying to build a narrative that only Hindus are being killed.

More than 30 people have been killed.

Kashmiri Pandits have been killed and so have Muslims.

Any killing is condemnable. The administration has to look at the reasons as to why this is happening.

They are using everything at their disposal and yet they are not able to control the situation.

It is for this reason that I want to ask the Centre, what do they mean by ‘normal’?

No normalcy can happen by curbing the ‘normal’ rights of the people.

No government can put a ban on the peaceful activities of the public.

By taking away the rights of the people, can you create confidence amongst the people.

These measures have been adopted earlier but they did not succeed.

Sadly, this regime believes only the danda will work.

Has this experience succeeded anywhere in the world?

We are not learning from the lessons of history.

Troop levels in Kashmir are disproportionate to the size of the population.

I do agree there are security concerns since this is a sensitive state.

Following the visit of Home Minister Amit Shah, additional companies have been sent to the Valley.

These forces have taken over community centres and wedding halls that are used by the common people. This was the only place the average person had access to.

Now even that has been taken away. This has raised even more discontent amongst them. 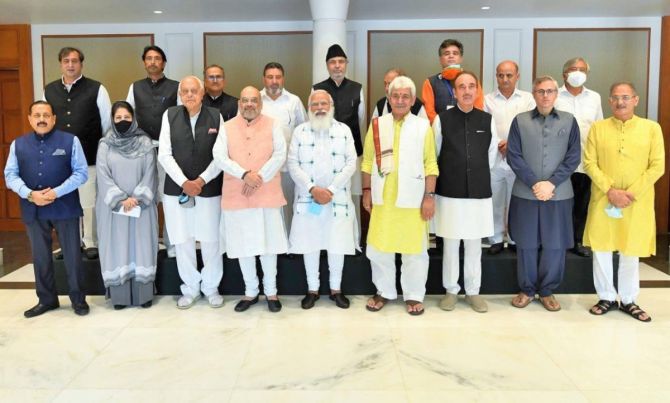 You had met Prime Minister Modi when he convened a meeting with Kashmiri leaders on the second anniversary of the revocation of Article 370 and Article 35 A. What has the follow up of that meeting been in Kashmir?

Modi has taken no action following our meeting.

We have demanded the government restore statehood to J&K and then hold elections but nothing has happened so far.

They are treating us differently.

We are a ‘special’ people who have been deprived of our basic rights.

Sadly, the government is not bothered with security concerns.

I had emphasised this point during our meeting with the PM.

Given our location, I had warned that there is a sensitivity involved as this is a frontier state.

The atmosphere around us is not conducive. But who listens?