As he struggles in hospital, I wonder why anyone, especially someone who was not even born when The Satanic Verses was published, would want to harm a 75-year-old man and a literary treasure, wonders Subhash K Jha.

My favourite Salman Rushdie story has a starring role for me.

It happened at Columbia University, New York, in November 2014 when Vishal Bhardwaj’s Haidar was screened. Salman Rushdie was the chief guest.

2,000 students from Colombia University were in attendance. My daughter was one of them.

Feeling a pinch of paternal pride, I had impulsively texted Mr Rushdie saying. “Sir, my daughter is right now one of your audience at Colombia.”

“What’s her name?” came the prompt query. I told him.

What happened next is stuff out of a dream. Mr Rushdie asked from the stage where is Lata Jha in the audience.

“Your father is asking about you,” he said. I am sure Mr Rushdie has long forgotten this incident. I haven’t. I never will.

It is so illustrative of the supremely gracious man and artiste that he is.

Why would anyone want to attack and wound him so grievously?

For a book (The Satanic Verses) that he wrote more than thirty years ago?

This is a bit like Aamir Khan’s enchanting masterpiece Laal Singh Chaddha being punished for what the actor said five years ago.

The attack on Mr Rushdie is far more sinister.

As he struggles in hospital I wonder why anyone, especially someone who was not even born when The Satanic Verses was published, would want to harm a 75-year-old man and a literary treasure. 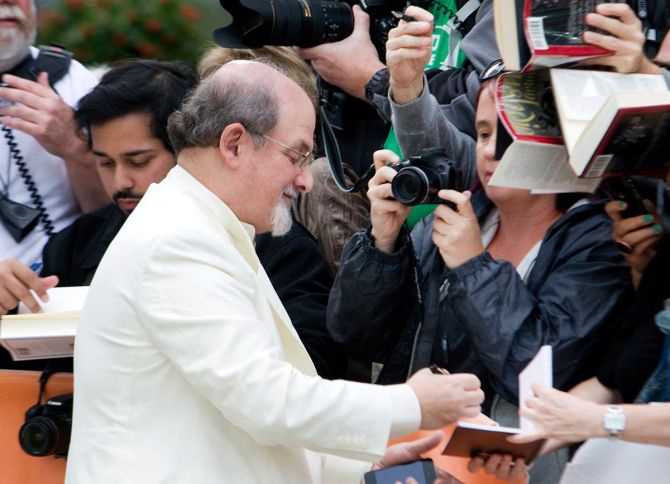 I reached out to Mr Rushdie’s dear friend, my dear friend, film-maker Deepa Mehta hours after the insane attack.

She seemed as baffled as I am.

Says Deepa, “Increasingly the world has turned mad. A 24-year old seeking vendetta for what?

“If only the world and its inhabitants belonged to one religion.

“I am heartbroken, angry, and feel hopeless all at the same time.

“Salman, one of the kindest, most loyal, brightest, funnies of the people I know. Lying in hospital!

“What to say except damn-you to the purveyors of hate.

“All benign gods being twisted into revenge seeking demons by self seeking men in power.

“And there lies of the greatest champion of freedom of expression, one of our most provocative, original writers, a victim of hatred!

“The world was becoming dark and today it turned darker still.” I was introduced to Mr Rushdie by Deepa.

The two had collaborated on a screen adaptation of Mr Rushdie’s masterpiece Midnight’s Children which significantly walked us through milestones of independenent India just as Aamir Khan’s Laal Singh Chaddha does.

Mr Rushdie was very happy with the end result.

Mr Rushdie said to me, “I’m happy that so many people who have seen Midnight’s Children have felt that it did justice to the original.

“Various Indian writers have seen it already, including Anita Desai, Kiran Desai, Suketu Mehta, and I’ve been much heartened by their approval.

“I wrote the screenplay and did the narration, and was regularly involved in the editing process.

“I wanted to roll up my sleeves and work during the film, and I did. We all did. And I learned a great deal.” Always a learner, a fierceless fighter, a warrior of peace… if this can happen to Salman Rushdie, imagine how vulnerable we all are!

How on earth did the attacker get inside this posh venue in New York with a knife?

What happened to good old frisking?

What happened to good old humanity and tolerance?