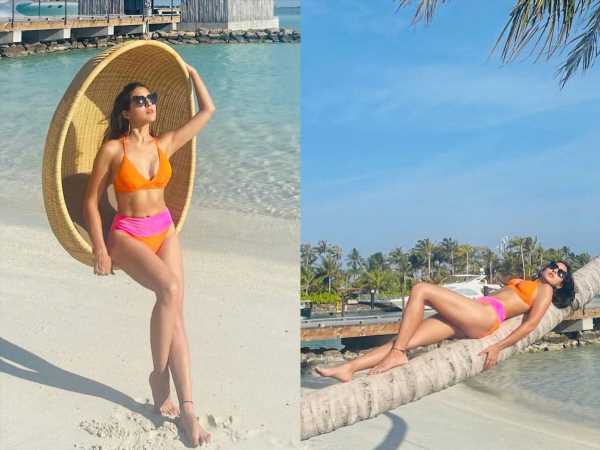 Sara Ali Khan, the daughter of Saif Ali Khan and Amrita Singh, is currently enjoying the vacation in  Maldives.  Kedarnath girl is an active user of social media sites, took to her Instagram to share her few pics from the vacations, in which  the star daughter and Bollywood actress is seen wearing a two piece bikini. Sara Ali Khan is seen posing for the camera on the beach in a pink and orange bikini.

Coming on the pics, Sara Ali Khan is seen smiling on a swing near the river in one photo and sleeping on a tree while soaking up the sun in another.

She made her debut in Bollywood in the year 2018 with the romantic film Kedarnath,  in which she romanced  Sushant Singh Rajput, which was just average at the box office. She is known for acting in action drama Simmba, co-starring Ranveer Singh, the remake of Telugu film Temper and Love Aaj Kal with Kartik Aaryan.

On the work front, Sara Ali Khan will be seen playing the female lead in Hindi movie Atrangi Re, co-starring Akshay Kumar and Dhanush.  The movie was planned to be released in theatres this year in the month of  February for Valentine’s Day but  was delayed due to the Coronavirus pandemic and the consequent lockdown.