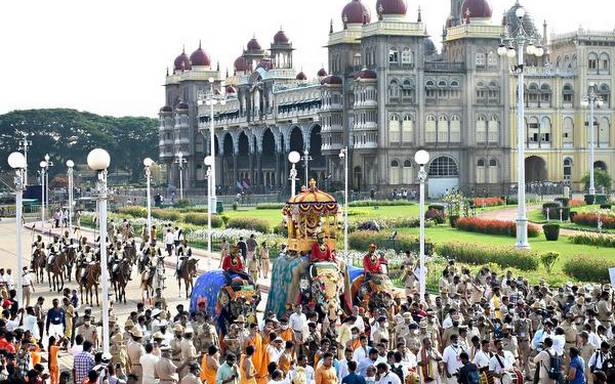 All traditional events to be held by ensuring social distancing

In the wake of COVID-19 pandemic, the world-famous 10-day Dasara celebrations will be held in Mysuru in a simple and traditional way from October 7.

Activities such as film festival, adventure sports, food mela, exhibitions, Yuva Dasara, and torchlight parade usually held during the celebrations will not be held this time too. These programmes were not held last year as well owing to the pandemic.

Chief Minister Basavaraj Bommai, who presided over a meeting of the Dasara High-Powered Committee on Friday, said the committee had unanimously resolved to celebrate the festival in a simple manner. He said ₹6 crore would be released for holding the festivities in Mysuru, Srirangapatna, and Chamarajanagar.

All traditional events, including inauguration at Chamundi Hills, will be held by ensuring social distancing, while the world famous Jamboo Savari (procession of caparisoned elephants) would be restricted to the palace premises.

The committee has empowered Mr. Bommai to decide the dignitary for the inauguration of the event. In 2020, corona warrior representatives inaugurated Dasara festivities.

Minister for Energy, Kannada and Culture Sunil Kumar said light decorations would be made in Mysuru during the festival.

As local small businesses, including hotels, in Mysuru have been impacted by the pandemic, the meeting discussed ways and means to revive the local business. The Chief Minister said ₹8 crore was released towards the dues of last year’s Dasara events.