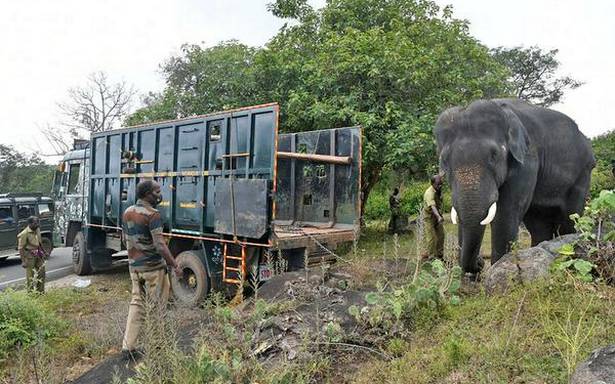 Two kumki elephants brought back into the operation

Two kumki elephants were brought again from the Theppakadu Elephant Camp for the operation to locate tiger T23 in the Mudumalai Tiger Reserve (MTR) on Sunday.

Srinivas and Udayan, which were brought to the “operation area” on special trucks, will help in the attempts to locate the tiger and allow veterinarians a safe platform from which they can dart the animal, officials said.

More logistics support came in from the neighbouring forest divisions in Kerala and Karnataka on Sunday, with the latter also despatching a trained sniffer dog.

Chief Wildlife Warden Shekhar Kumar Niraj, who has been camping at the MTR for the last few days, is at the forefront of the operation, which entered the eighth day.

Sources said the tiger was yet to be seen or captured on camera traps since Saturday. On Sunday evening, a resident of a village told Forest Department officials that she heard the animal growl from a nearby abandoned quarry. But the tiger remained undetected.

Bhosale Sachin Thukkaram, Deputy Director of the MTR (core area), said the tiger was not spotted on Sunday, and the search area had been expanded to Masinagudi and Singara.

He said camera traps placed around the search area would be combed for images of the tiger to understand its movement. The operation would continue on Monday.