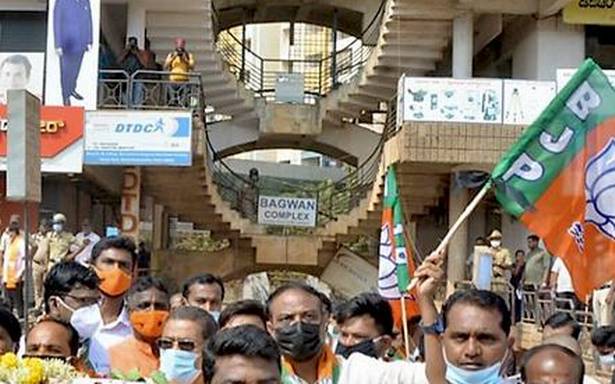 Alleging that the Congress-led Punjab Government had failed in ensuring security to the Prime Minister, members of the Bharatiya Janata Party (BJP) took out protest marches and held demonstrations in various districts of north Karnataka on Friday.

They accused the Punjab Government of deliberately posing a threat to the Prime Minister’s life for political reasons and demanded that the Congress-led Government be dismissed. The protest marches took place amid the ban on any type of protests and processions under the COVID-19 protocol imposed by the State Government.

In Hubballi, BJP Youth Wing members took out a mock funeral procession of Punjab Chief Minister Charanjit Singh Channi from ESI Hospital to the Congress office on Karwar Road. District general secretary of BJP Dattamurthy Kulkarni alleged that the Punjab Government had deliberately stopped the Prime Minister who was proceeding to inaugurate development programmes, through a farmers’ protest.

In Dharwad, a demonstration was held seeking imposition of the President’s Rule in Punjab. Leading the agitation, the newly chosen president of the Dharwad Urban District Unit Sanjay Kapatkarm, the former MLA Seema Masuti, and others condemned the “security lapses” by the Punjab Government.

In Gadag, Belagavi, Haveri, and other districts, BJP workers led by local office-bearers staged demonstrations seeking action against the Punjab Government and alleged that the Prime Minister was made to return midway for political reasons.