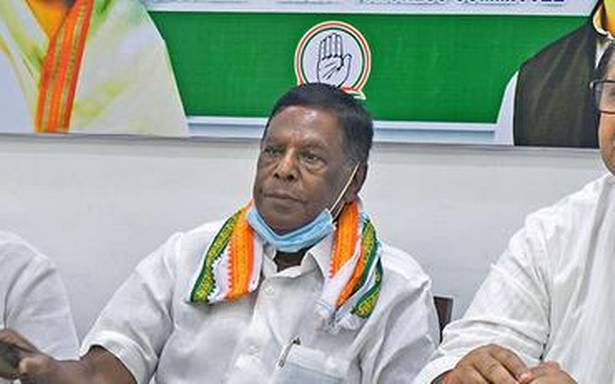 No action has been initiated against the culprits, complain Congress leaders

Former Chief Minister V. Narayanasamy on Sunday said the seizure of gold coins and money from supporters of a BJP candidate at Thirunallar constituency has revealed BJP’s plan to influence voters through their financial might.

Addressing a press conference along with Member of Parliament V. Vaithilingam and AICC secretary Sanjay Dutt, the former Chief Minister said though the gold coins and money meant for distribution to voters were seized, no action had been initiated against the culprits.

A resident of Thirunallar, P. Durai, had already written to the Election Commission of India, he said adding that “the BJP was daydreaming of coming to power using money power and official machinery.” No arrest had been made so far in connection with the seizure, he added.

“It is painful that the authorities concerned have failed to initiate action. The Congress, DMK, CPI and VCK candidates have complete faith in the power of people as they would give a befitting reply to the use of money power,” he said.

“The AINRC was in power when BJP came to power in the Centre in 2014. Both parties shared a good relationship till the Assembly poll in 2016. Mr. Rangasamy should explain to the people whether he was able to get Statehood and waive the legacy loans. AINRC chief is repeating the same issues even now,” Mr. Narayanasamy said .

AICC secretary Mr. Dutt said the Congress was getting “good response” from the public because the voters were aware of the obstructions created to the Congress government by the Centre using the previous Lt. Governor and then the toppling a democratically-elected government.

“By toppling an elected government, the mandate of the people was humiliated by the BJP. Now the people are also aware of blatant misuse of official machinery by the BJP to get votes,, including obtaining Aadhar details of the public to influence voters,” he added.

Despite the “obstructions” created by the Centre and previous Lt. Governor, the Congress government was able to "perform" and won several awards from Central Ministries, including NITI Aayog, Mr. Dutt said.