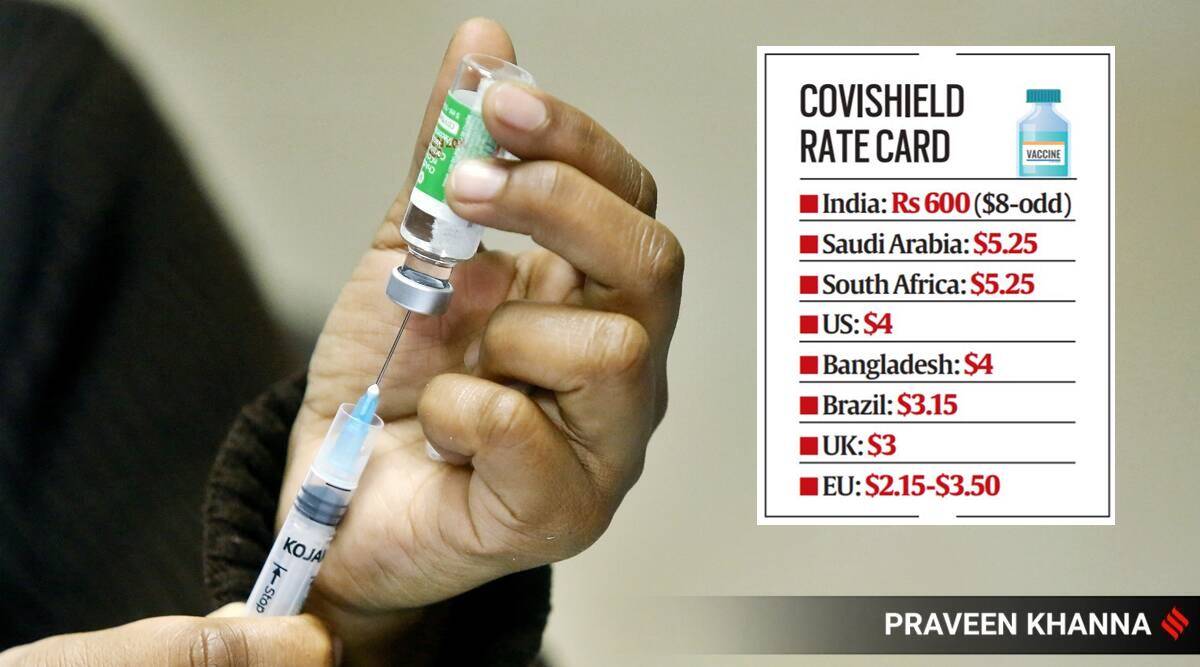 This, despite it being contract-manufactured by Pune’s Serum Institute of India whose CEO Adar Poonawalla had said that the firm was making a profit even at a price of Rs 150 per dose. At Rs 600 per dose, Indians getting inoculated with Covishield at private hospitals from May 1 could end up paying the highest price in the world for this vaccine developed by the University of Oxford and AstraZeneca.

This, despite it being contract-manufactured by Pune’s Serum Institute of India whose CEO Adar Poonawalla had said that the firm was making a profit even at a price of Rs 150 per dose.

In fact, Poonawalla also floated the Rs 1,000 per dose ($13) rate after the first shipment went out telling ANI: “We have given a special price of Rs 200 for the first 100 million doses only to the Government of India… and, after that, we will be selling at Rs 1,000 in private markets.”

But SII’s latest rate card, of Rs 600 per dose for the private market — coming amid the fierce second Covid wave —translates to about $8 per shot and is more than its price in any major global market.

Indians getting vaccinated at state government hospitals, too, could end up paying around Rs 400 (or over $5.30) per dose from their pockets, if states decide they cannot afford to absorb the costs of procuring fresh doses.

Even the Rs 400 procurement price — applicable to both State and new Central procurement orders — is higher than the price at which governments in countries such as the US, UK and in the European Union are sourcing directly from AstraZeneca.

It is also higher than the price agreed by countries such as Bangladesh, Saudi Arabia and South Africa for supplies of the vaccine from SII. In most of these countries, the shots are being administered for free, with the governments absorbing the costs.

While AstraZeneca and Oxford developed the vaccine, SII has been manufacturing it under a licence from the Swedish-British drug maker and also conducted a bridging study of the vaccine in India.

On Wednesday, Poonawalla said that a large portion of the Rs 3,000 crore “advance payment” by the government would be used to supply an order of 110 million doses of Covishield.

The doses in this order, which Poonawalla said was placed by the Centre “about a month ago”, would be priced at the older rate of Rs 150 per dose. In terms of per dose pricing, the 27-nation EU is paying $2.15-$3.50 for a shot of the vaccine across locations in Europe, a high-cost manufacturing destination.

The EU had, incidentally, invested $399 million “at risk” in AstraZeneca way back in August 2020, in return for 400 million doses of its vaccine. The UK, which had a smaller investment commitment to AZ, is paying about $3 per dose and the US has been offered the vaccine at $4 per dose, according to data compiled by British Medical Journal. Both the US and the UK are paying the amount directly to AstraZeneca.

Meanwhile, Brazil is reported to be paying $3.15 per dose for the AZ vaccine through state-owned Oswaldo Cruz Foundation (Fiocruz), another licenced producer.

Bangladesh, according to Reuters, is paying an average of $4 per dose supplied by SII, with the BBC having quoted a health ministry official in Dhaka citing that it entails a total cost at $5 per dose, incorporating the margin charged by Beximco, the vaccine’s Bangladesh distributor.

Both South Africa and Saudi Arabia had paid over $5.25 per dose from SII, according to UNICEF’s Covid Vaccine Market Dashboard, which collects publicly reported price information. This is higher than the price at which Indians will get vaccinated at state government hospitals, without subsidy.

Queries to Minister of Health and Family Welfare Dr Harsh Vardhan and Health Secretary Rajesh Bhushan about whether the Centre had agreed to an increased price of Rs 400 per dose for Covishield remained unanswered. SII didn’t respond to questions.

With the fine print still awaited, it is still not clear how much more people getting vaccinated at private hospitals will have to pay when the facilities factor in overhead costs. While the government has said this will be “monitored” closely, vaccinations only for those above 45 will continue to be free at government facilities.

The NDA government had initially negotiated the cost of Covishield to Rs 150 plus GST, or around $2.02, per dose. However, Poonawalla has made it clear that the firm’s subsidized rate of Rs 150 per dose to the government was only for a “limited” period of time.

“This is based on the Modi government’s request, and we’ve risen to the occasion, sacrificed profits — I wouldn’t say we’re not making any profits — but we’ve sacrificed what we would call ‘super profits’, which we would need to further build capacity, innovate and compete with the Western companies,” Poonawalla told NDTV on April 6.

In another interview, to CNBC TV-18 after announcing the higher rates on Wednesday, he said SII was losing money: “50 percent of my revenue has to be given to AstraZeneca as a royalty and that is why the price at Rs 150 was really, really just not making sense.” He claimed that Covishield’s price to India is now higher than in other countries is also because their prices were negotiated “a long time ago” for limited quantities when there was uncertainty about its success.