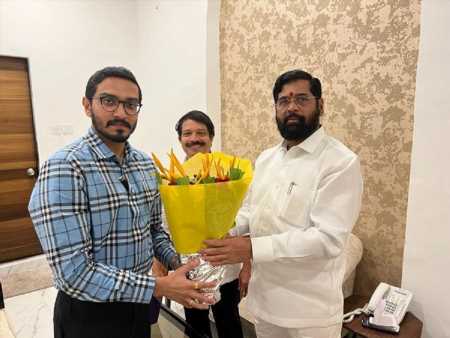 Nihar Thackeray, the grandson of Shiv Sena founder late Bal Thackeray, has said that he supports the Eknath Shinde faction of the party and is ready to campaign for the upcoming Andheri East assembly byelection as well as the Mumbai civic body polls.

He also did not rule out joining electoral politics.

It will be the first major electoral contest in the state after Shinde’s rebellion brought down the previous Maharashtra government led by Uddhav Thackeray in June this year.

Nihar, the son of Bindumadhav Thackeray, Bal Thackeray’s eldest son, is a lawyer by profession. He is also part of Chief Minister Shinde’s legal team in the battle in the Supreme Court over which is the ‘real’ Shiv Sena.

Shinde was taking forward the legacy of his late grandfather and hence he supported the chief minister, Nihar told PTI in an interview.

On Dussehra, when his uncle Uddhav Thackeray and cousin Aaditya addressed a rally at the Shivaji Park in Mumbai, Nihar Thackeray was on stage with Shinde, who addressed a separate rally at MMRDA ground in the state capital.

Uddhav’s elder brother Jaidev and Jaidev’s former wife Smita too shared the stage with Shinde, in an apparent attempt to send out a message that barring Uddhav and his son, the rest of the family supported Shinde.

Nihar declined to comment on the fissures in the family, but said Bal Thackeray was the glue that kept it together.

“If required, I will keep myself available for the bypoll and BMC (Brihanmumbai Municipal Corporation) polls. I will continue to extend support to Shinde ji,” he added.

Bindumadhav Thackeray, producer of the 1996 hit Hindi film “Agni Sakshi” among others, died in a road accident in the same year.

Nihar is married to Ankita Patil, the daughter of former Maharashtra minister Harshvardhan Patil who is now with the BJP.

Asked whether he would participate in electoral politics, Nihar said, “I have not really given it a serious thought…I am a lawyer by profession. But not taking that decision does not mean I will never do it.”

“I am not saying it’s a complete no. I have just not given it a complete thought yet,” he said.

His cousin Aaditya became only the second member of the Thackeray family to contest an election when he won from Worli Assembly constituency in 2019.

Before that, Shalini Thackeray, another member of the extended family, had contested the 2009 Lok Sabha election unsuccessfully on the Maharashtra Navnirman Sena (MNS) ticket.

“Ever since Balasaheb passed away, I have not been an active part of the Shiv Sena or politics for whatever reasons. It did not happen,” Nihar Thackeray said.

“Had there been an option, I would have definitely liked to be a part of it. It (the party) is something which my grandfather started. For whatever reasons, I was not part of it,” he added without elaborating on why he did not find any role in the Sena after Uddhav Thackeray took over.

Asked about his association with Shinde, he said he met the chief minister for the first time in July this year.

“Balasaheb had clearly said that he will never join hands with the Congress under any circumstances. For whatever reasons, things happened and Maha Vikas Aghadi government (of the Sena, Congress and NCP) came to power, and then Shinde saheb decided to walk away,” Nihar Thackeray said.

The government which had been given the mandate to rule (in 2019) is now in power, he added.

The Shiv Sena and the BJP had contested the 2019 Assembly elections together but fell out after the results.